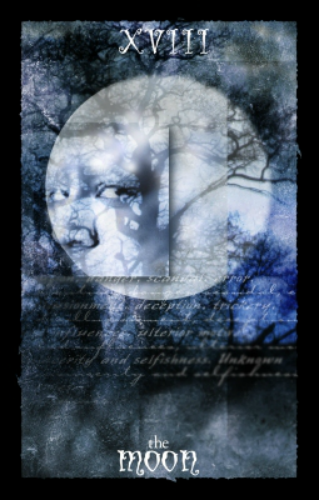 Today you may be feel the need to get more in touch with your emotions. You may sense that there’s more to something (or someone) than meets the eye, and be compelled to seek out a clearer understanding.

The Moon card — like the Moon in the night sky — can seem mysterious and unfathomable. It is the yin to the Sun’s yang; representing primal instincts and intuition.

While the Sun rules the day and light, the Moon rules the night and darkness. Mystery, the unknown, all that is hidden and that lies beneath the surface. This is the realm of the unconscious: that which is churning beneath your awareness and which often translates externally as anxieties, insecurities and fears.

It sometimes manifests as confusion, uncertainty or paranoia — especially when we try to analyze it logically, which is foreign to the realm of the Moon. Just as we can’t fully appreciate the beauty of the Moon in the light of day (consciousness), we struggle to grasp its archetypal meaning through the lens of logic or reason.

This morning at 2:14 am Eastern time, an Annular Solar (New Moon) Eclipse occurs at 9° Taurus, a sign known for its practical nature.

This eclipse sets up a new lunar cycle. You can expect to see rapid changes — potentially quantum leaps — in the area the eclipse falls for you personally.  As Taurus doesn’t like “rapid” anything, it can be disconcerting to experience so many changes in an area that you like to keep steady and calm.

But there’s also an element to “secrets revealed” that comes with New Moon eclipses. Think of how the light of the Sun (consciousness) is temporarily hidden, and taken over by the shadow of the Moon. “Out of the darkness comes the light” said the world-famous Unknown. And nothing could be truer than that for the events that succeed a New Moon eclipse.

Be open to what the Universe has in store for you and be willing to hear some truths you may have buried deep in your unconscious. Remember that things do look different under the light of the Moon, and that “different” isn’t always a bad thing.

Today’s card — the Moon — comes from the Tarot Obscura by Chris Bivins. This beautiful deck appears to be out of print currently. More information can be found on Adam McLean‘s amazing Alchemy website.