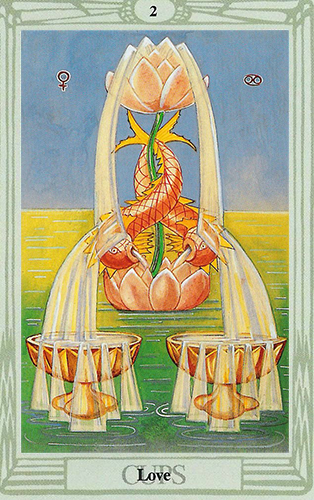 Love and romance are in the air today — hopefully for you — courtesy of the Thoth deck’s version of the Two of Cups.

The Two of Cups is known as the “Love” card as it refers to that love at first sight sense of finding your other half. It’s the mutual attraction card, the “soul mate” card, and so much more. It’s the process of falling in love or renewing a love connection that replenishes itself over time.

In this version of the card, the astrological glyphs for Venus and Cancer feature prominently. And while Venus is currently in Pisces, the Piscean aspect is referenced here too.

The entwined fishes (symbol for Pisces) double as a set of living fountains that refill and replenish the lotus blossoms in an ongoing state of renewal.

Notice how the water that cycles between the fountains and lotus blossoms is diverted into two overflowing Cups. It’s a reminder that there is always more than enough — of feelings, emotions, affection, adoration and love.

Venus is exalted in Pisces, meaning that its influence in this sign is purer and more refined. It’s in aspect with Pluto today as well — bringing in harmonious (sextile) elements of passion and desire.

But the Two of Cups is not always a “love” connection. it can refer to a sisterhood, a business partnership, a parent/child relationship or some other deep bond. It refers to the “sum of the parts being greater than the whole” axiom, which reminds us that two heads (and hearts) are better than one.

You may meet someone new today or hear from a loved one across the miles. If so, see it as an opportunity for growth. It could be the yin to your yang — or it could just be a friend who shows you the true meaning of the word. Whichever it is, be grateful for the opportunity to express yourself and to spread the love around.