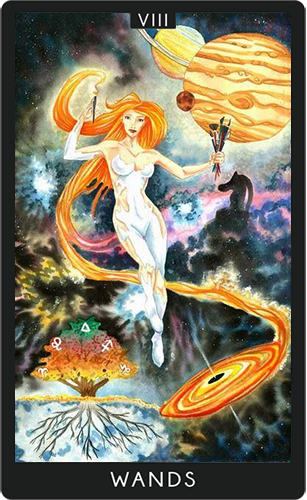 As we begin the New Year, Mars and Jupiter come together today in a powerful and dynamic opposition.

This is a high-energy aspect that ties in perfectly with the Eight of Wands.

The Eight of Wands is all about action, progress and momentum. It’s about getting things done and making things happen.

It may be as simple as ticking off all the little things on your to-do list, and it may be as significant as making great headway on an important project.

And with 2015 stretching out before you, it may be the monumental task of setting your intentions in motion in the form of New Years resolutions.

Although you may have expected to relax today (after a night of celebrations), you’re more likely to be busier than ever.

While it might feel to you like there just aren’t enough hours in the day, you could be surprised when it’s over at how much you really accomplished.

The Eight of Wands can also refer to travel. In that respect it relates to being literally and physically on the go. Are you planning a weekend getaway? Use this extra energy to make preparations for your trip.

Keep in mind though that the Mars / Jupiter transit can also be somewhat reckless. You want to stay alert and pay attention to your environment if you do end up making travel plans. 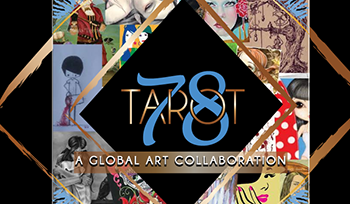 Today’s card — Eight of Wands — comes from the 78 Tarot, a collaborative effort designed by 78 different artists from around the world.

This particular card was designed by Anastasia Smith Komanatov.

The 78 Tarot was published by Artists Assembled, LLC. and is the result of a successful Kickstarter campaign. It’s now available through both the 78 Tarot website and the deck’s Etsy storefront.