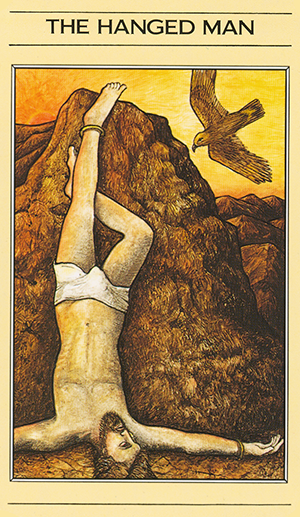 Mars moves into Cancer today, just as Chiron turns retrograde. The combination of these two transits can not only slow things down for you, but can put you in a position of making an important but necessary sacrifice.

The Hanged Man — this version from the wonderful Mythic Tarot — refers to a period of waiting. It can manifest as delays or restrictions as in seeing something you want so desperately held just outside of your grasp.

You could be frustrated over something that’s taken too long to manifest, or have the sense that nothing is happening despite your best efforts. Road blocks are put in your path — often for your own good. But this card doesn’t refer to endings; this is more about putting something on hold than it is about closing any doors.

The Hanged Man in this card is portrayed by the Greek god Prometheus, who sacrificed so much in order to bring fire to mankind. As penance he was sentenced by Zeus to a life of pain and misery; he was shackled to a boulder high in the mountains where his liver was devoured by an eagle who repeated this torture for the remainder of his days.

Because Prometheus was immortal, he couldn’t just die, nor could his liver be consumed only once. It renewed itself every night, only to be devoured again the next day. Zeus eventually took pity on Prometheus (after 30 years!) and allowed him to be rescued by Heracles, putting an end to the threat of eternal damnation.

The Hanged Man often refers to delays and sacrifices. When it does, you can bet they’re necessary. Trust that there’s a reason — even if it’s not readily apparent. You may have been running at a break-neck pace, never stopping to look at what you’ve accomplished. Or you may have found yourself losing steam over a project that just hasn’t panned out.

Either way, it may be time to put things on hold — at least long enough to evaluate your commitment. Think about the areas in your own life that have taken longer than expected to manifest. There may be a perfectly reasonable explanation, or it may be that there’s still work to be done. Either way you can rest assured that the reasons will become clear to you in time.