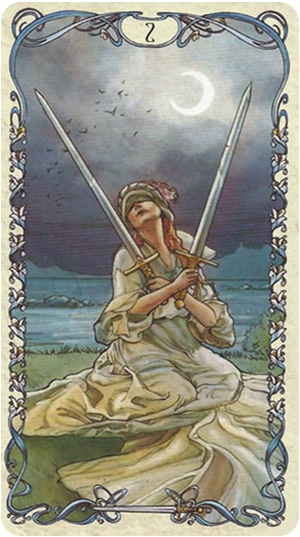 Today’s Mercury / Jupiter opposition could have you feeling like you’re being pulled in two different directions. Or you could be struggling with important decisions that have been weighing heavily on your mind.

The Two of Swords can refer to an impasse or stalemate that’s more likely than not a result of your own indecision.

It can refer to a pivotal moment in time where you recognize that the options before you are equally appealing (or terrifying) and that whatever decision you make will have a huge impact on your life.

In this respect it can refer to inaction and immobility. Sometimes this is due to fear: “What if I make the wrong decision?” But it’s just as often related to a desire to not have to choose at all.

Today’s Mercury / Jupiter opposition has some assistance though — in the form of a supporting aspect to Uranus. This can break up some of the crystallization, making it easier to think outside the box and come up with solutions to whatever impasse you’re facing.

This version of the card — from the gorgeous Tarot Mucha — has the classic figure of a woman on a beach blind-folded under a crescent moon. She’s detached herself while the Swords (decisions) before her take form. She may be leaning toward one option (toward her right which is associated with emotions, psychic perceptions, creativity and spirituality), but she hasn’t yet taken a stand.

This is the dilemma with the Two of Swords. It tells you that while either decision leads to a different outcome, you can’t know the exact nature of that outcome until you make your choice.

Weigh your decisions carefully today, knowing that they can have far-reaching repercussions. While you may need to step back and consider each option carefully, in the end you will have to decide and then abide by that decision. 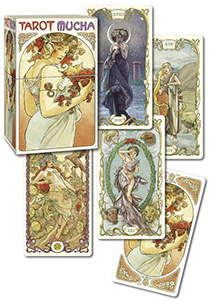 The card used for today’s tarotscope — Two of Swords — comes from the Tarot Mucha by Pietro Alligo, Giulia F. Massaglia and  Barbara Nosenzo.

The Tarot Mucha is a tribute to Czech Art Nouveau artist and pioneer Alphonse Mucha. The accompanying book with interpretations comes from the fabulous author and Tarot aficionado (and so much more) Lunaea Weatherstone.

This is a Lo Scarabeo deck, published by Llewellyn.