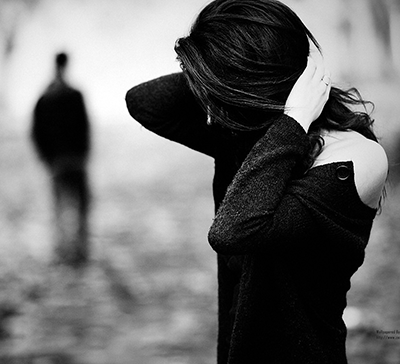 Ask the Astrologers: Is He Gone for Good?

A client whom we’ll call Tara, wrote in with a question regarding her long-term relationship which ended abruptly in November. She writes:

As the new year looms, I’m looking around and still confused and shocked at what has rolled out in the past few months.

My now ex boyfriend broke up with me after a long term relationship during which we’d made constant plans for our future. We purchased a home together and got a dog, were talking about combining our 401Ks, discussing marriage, etc.

About a month before we planned to get engaged, he started becoming more and more distant and when I pressed him on it, he got defensive and withdrew further.

He ended up breaking up with me, and I’ve since moved out. I was completely blind-sided by this and am still reeling over what seems like a selfish and impulsive decision.

I guess I’m wondering if he’s gone for good or if there’s some chance he’ll “wake up” and want to get things back on track. Can he really just be done and move on that quickly? Am I missing the big picture? Help! needing some healing, hope and direction for 2015.

When I got Tara’s question I immediately did what’s called a “horary” chart, which is a divination technique that uses the birth of a moment in time (the moment the question is received) to look at the outcome of a question. Here it is: 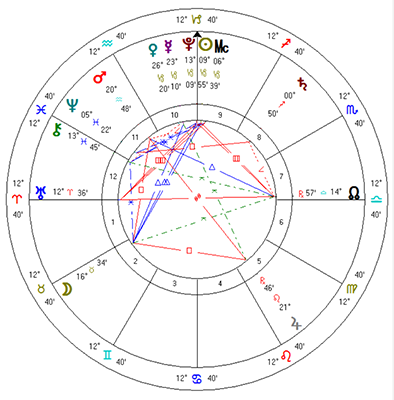 I also looked at both natal charts for the connections between them as well as the transits to those charts. In order to preserve their anonymity, I won’t include those charts here, but suffice it to say that there are definite indicators of strife in that relationship and I wasn’t surprised to learn that they’d broken up.

The horary also shows the breakup — with Uranus on the 12th house side of the ascendant the rulers of the querent — Moon and Mars — in square aspect. In this case the Moon also rules the area related to “home” and Tara’s leaving the home as a result of the breakup is also clear.

The Sabian symbol for that Mars is “A woman disappointed and disillusioned,” which also describes Tara’s emotional state. Her ex (whom we’ll call “Tom”) had complained (Mars) about her lack of social aspirations (11th house) when he unexpectedly and without warning (Aquarius) pulled the plug.

There’s a tight Pluto / Uranus square in this chart which forms an even tighter t-square to Tara’s natal Sun. This is the proverbial rug being pulled out from beneath her, and will unfortunately remain in effect (to varying degrees) for the better part of the year.

However, the last aspect the Moon makes is a trine to Venus which offers some hope for reconciliation.

Her ex — who we’ll call “Tom” — shows up as Venus in the 10th house in Capricorn. There’s the career aspect (he told her he’d been busy and stressed about his career) as well as other 10th house / Capricorn considerations: this disparity in their career goals which had never been a problem before were now one of his main reasons for ending things.

My feeling in looking at this is that there was more to this story than Tom was willing to cop to. That Venus is not only “void of course” (it’s done forming aspects to other planets before it changes sign) but it’s exactly on his natal Moon. I felt there might be another woman in this picture, someone he has professional (10th house / Capricorn) ties to most likely. If so it’s unlikely to lead to anything (due to the void of course) but because it’s elevated it’s probably the main reason he ended things.

There’s a t-square in the horary chart involving the Moon, Mars and Jupiter. That t-square emphasizes not only the emotional discord in their relationship but also the differences between what each of them want. My feeling was that there’s another crisis ahead (as that t-square tightens) and a potential for resolution if they can get past that crisis without causing further destruction.

I wanted to Ask the Tarot though too, especially as it can reveal certain nuances about a situation that astrology sometimes can’t.

In this case I looked at the three cards as past, present and future. Here’s the spread: 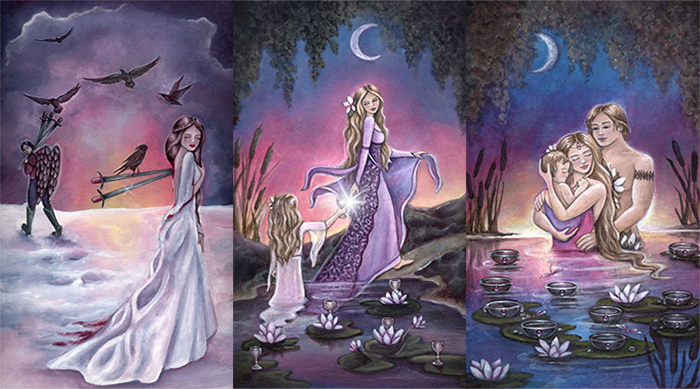 The deck used for this spread is the Crystal Visions Tarot by Jennifer Galasso,  published by US Games.

Jennifer was kind enough to grant permission for the use of her beautiful cards, which seem to fit this situation so well. Please take a moment to stop by and “like” her Facebook fan page!

Now back to the spread:

The first card — Five of Swords — is traditionally associated with power struggles. Combativeness. Anger and strife. Bickering and fighting. Not seeing eye to eye. And so on.

In this deck though the imagery speaks so powerfully of feeling rejected and betrayed — stabbed in the back literally in this case. You can see the woman in the card has tears streaming down her face as her lover walks off into the distance. He may be looking back over his shoulder — and he appears to have some regret — but he’s still walking away.

This describes what’s happened pretty graphically, right down to the sadness and pain she’s experienced and the sense of shock over having had things fall apart so unexpectedly.

The middle card (present) is the Six of Cups. This tells me that he does miss her, that there’s some reminiscing about the past and that the history they share could be what brings them back together.

The emphasis with this card is on nostalgia and reminders of the past. Focusing on the good times. Happy memories. And even getting back in touch with a period of innocence and wonder (in contrast to the focus on work, responsibilities, pans and expectations, etc.).

I would caution Tara to not hold onto the past too much though as there’s a lot of danger here of throwing things further out of balance. The Moon/ Mars/ Jupiter t-square in the horary chart says things are likely to get worse — as in more emotional drama and more emphasis on the imbalances in their relationship — before they get better.

The outcome or “future” card here — Ten of Cups — says they absolutely can get things back on track and “live happily ever after.”

In fact the cards were a lot more encouraging than the horary or their individual transits. My feeling with this card is that they’ve built a solid enough foundation to make their dream still a possibility. But that getting from point A to point B — from the Five of Swords to the Ten of Cups — is going to take some time.

Notice that the crescent Moons in the 2nd and 3rd cards are reversed. That feels like it’s giving a month — or a full lunar cycle — as timing. Astrologically though, I feel it’s closer to two or even three — based on “wake up call” transits (Saturn) in Tom’s natal chart.

This breakup was absolutely a Saturn transit for both of them. For him it was his Saturn return and for her it was Saturn square her natal Venus. This is such a karmic aspect between the two of them (and there were others — too complicated to get into here) that I feel it’s going to be hard to break, even if breaking up would be for the best.

I definitely feel there is more to come here. But their transits are not going to be easy this year, which means there will be more challenges to come.

I am going to recommend an actual session with Tara as I feel that what she does now can impact greatly on the outcome of this situation. While astrology (and the tarot) can tell us where things are heading, we do all participate in our destiny and can use this information to maximize our returns.

2 comments on “Ask the Astrologers: Is He Gone for Good?”