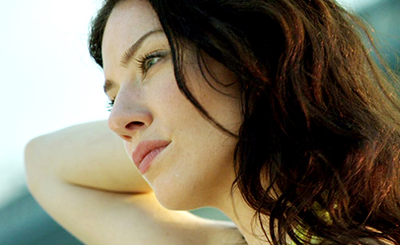 Ask the Tarot: Where is this Relationship Heading?

One of the most common questions that psychics, astrologers and tarot readers are asked is: ”Where is my relationship heading?” This usually comes in the early days of a new relationship, when things are still relatively undefined — but can also come later on in established relationships, after there’ve been a few bumps in the road.

One of the easiest (and quickest ways) to look at a question like this is to simplify it — at least in the first tarot spread. You would of course look at the many layers of a specific relationship dynamic with more comprehensive spreads. But to start out, the simpler — in terms of bottom line answers — the better.

So let’s see how this works. Let’s “Ask the Tarot:”

In this instance we have Sarah asking about Neil and where their relationship is heading. A bit of back-story here: Sarah has been seeing Neil for almost 5 months. She’s getting a bit frustrated with what seems like a stall in their relationship and wants to know if things are going to move ahead or if it’s time to cut her losses and move on. Here’s the spread: 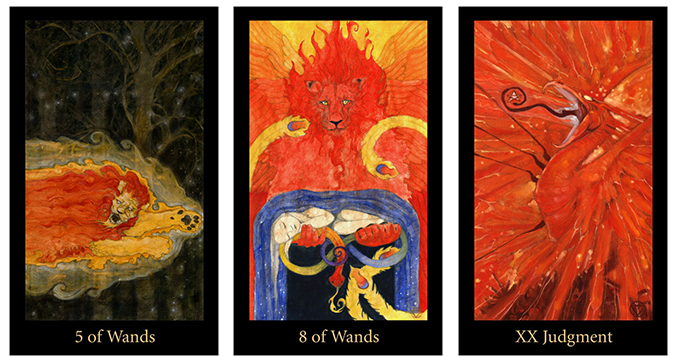 The deck used for this spread is the Mary-el Tarot, a stunningly beautiful and richly symbolic deck. Although the deck itself was designed using a vast array of colors, this particular spread references the red / orange color spectrum, making you (or at least me) think of fire, energy, passion and lust. 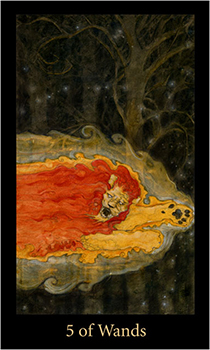 Sarah is represented by the 5 of Wands. Even if she believes she’s been able to contain her frustration, it must be evident to all who are around her. She may feel like she’s holding back but the energy presented here is one of obvious “chase” even if it’s done in an indirect way.

The 5 of Wands in many decks refers to conflict, competition, forcing your will on others, trying to be heard above the “roar” of opposing viewpoints and struggling against cross-purposes.

In this deck we see the 5 of Wands represented by a lion charging through the thicket — undaunted by the obstacles (trees) before him. In fact he’s enveloped in a protective aura of light, as he moves toward his objective.

Does the aura that surrounds him insulate him from danger? Or does it obscure his own motivations and the repercussions of his actions? Sarah might not even realize that she’s pushing. In fact she’s insisted that she’s not. Yet her actions are translating as pressure to Neil — at least on some subconscious level. 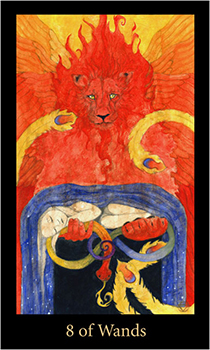 He shows up here as the 8 of Wands. This is an interesting rendition of this card as it too contains a prominent lion figure — albeit in a completely different light. This Lion appears as a guardian angel, with a fiery mane and golden-orange wings.

It’s not showing the same level of forceful aggression or action as Sarah’s card, and it’s not showing him being particularly bothered by her discontent. While she charges ahead (5 of Wands), he seems complacent (8 of Wands).

Notice the figure resting contentedly in the Lion / Angel’s arms. And notice the serpent, in the form of a lemniscate, that encircles her sleeping figure. He’s not in any hurry to fix things, change things, or move them ahead. He’s content with where they are — and may even be completely unaware of (asleep to) her frustration.

In many decks, the 8 of Wands does signify energy, motion and action. And we can surmise that the figure in this card will awaken from her sleep more rested and prepared to move ahead. But her rest is an integral part of her preparation and is just as meaningful. 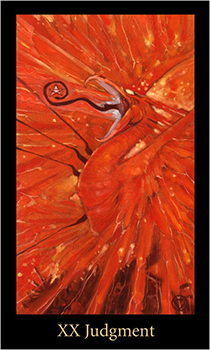 The relationship itself is depicted by the Judgment card, which in this deck contains the mythological Phoenix rising from the ashes. We can see that there is “triumph” inherent in the imagery here — a sense of having not only survived but conquered.

You can see the fiery embers still crackling and smoldering at the base of the giant bird. But he cries out triumphantly — not in fear or pain but in courage and exultation.

This is a card of rebirth and redemption. It says that not only is this relationship salvageable, but that it can grow into something bigger than either of them imagined. They can not only overcome whatever obstacles are before them, but can surpass their own dreams and expectations.

In many decks this card speaks of understanding, acceptance, forgiveness and unconditional love. My advice to Sarah would be to try to embrace these qualities, and to accept Neil for who and what he is — rather than trying to push things forward. She does have valid concerns and at some point will want to express them, so that he can do the same.

There really is no hurry — no need to race to the finish line — especially when all indications here are that they truly do have something special.

As I told Sarah, it’s not only NOT time to throw in the towel, but if she can allow herself to rein in her “Lion” and let things develop naturally, this relationship can evolve into something wonderful.

2 comments on “Ask the Tarot: Where is this Relationship Heading?”