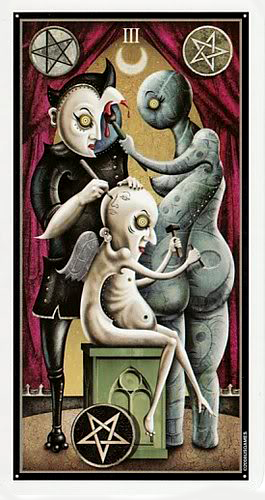 Today is a good day to put your head together with others and work on bringing a project to fruition. The Three of Pentacles is a “teamwork” card, among other things.

It’s about hitting your stride and seeing initial results of something you’ve been working hard on.  Sometimes you need help to take it to the next level, even if that comes in the form of a critical eye.

The Three of Pentacles — like all threes — refers to the initial stages of progress where you’ve taken an idea (the Ace) put it into production (the Two) and are making progress now toward creating something real (the Three).

The imagery in this card describes this process beautifully. We see three half-formed figures all actively creating one another and all benefiting from the help they receive from their peers.

Notice though how each of these figures is different. The first one — a human — is working on the second figure (an angel) in pencil; the angel is chiseling away at the third figure, who appears to be a robot; the robot is actively working on the human’s face with bright red paint.

There’s an interdependence depicted here and a camaraderie. Each of these figures needs the others and all of them are contributing equally.

It’s a good time to reach out to others and ask for help if you need it. It can’t hurt to offer it to those who could benefit from your assistance either. You may just need a little push to get past a hump, or you may need the discerning eye of someone you trust.

The Three of Pentacles says that you’re making progress and should be feeling good about what you’ve accomplished so far. But there’s still work to be done, and you won’t be able to do it alone.

The card used for today’s tarotscope is part of the Deviant Moon Tarot, designed and created by Patrick Valenza. Used by permission. For more information on his deck and to purchase them, please visit his website as well as his facebook fan page. Thank you Patrick!