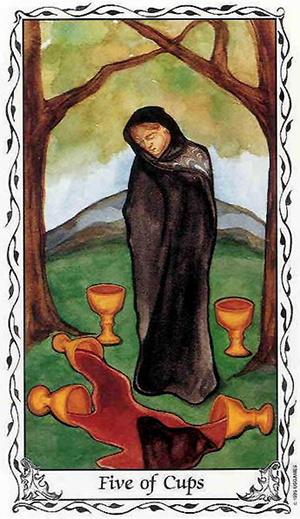 It’s not so easy to focus on what you have when you’re busy thinking about what you lack. This is especially true today as Venus and Saturn move into hard aspect, making the potential for seeing the glass as half full stronger than ever.

In this case it’s three glasses (or rather three cups) and they’re not just half-full, they’ve all been tipped over and have spilled their contents onto the ground.

But if you look at the figure in the card — the Five of Cups from the Hudes Tarot — you can see that there are two cups still upright and full, right there behind him.

He doesn’t even notice the upright cups; he’s so busy mourning the loss of the ones that have spilled. And this is the essence of the Five of Cups. Something has definitely been lost — never to be retrieved — but there’s also still something left, and he only has to broaden his perspective to see it.

The Five of Cups says that it is imperative to start focusing more on what you have than what you lack. Yes you may have been bruised and battered. And yes you have every right to feel let down. But it’s not going to do you any good to cry over spilt milk (or in this case wine).

You’ll have to dust yourself off, put a smile on your face and tend to the two cups that are still standing if you want to make sense of all that you’ve been through. You won’t be able to salvage everything. But remember that all has not been lost. The Venus / Saturn square will soon pass, and as tomorrow is a New Moon, you can start thinking again about the future. 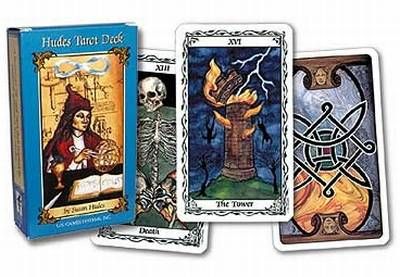 Susan Hudes is a painter and illustrator living in NYC. She is a graduate of the Parsons School of Design.

A.L. Samul has written children’s books as well as oracle and tarot books.

The Hudes Tarot is published by US Games.