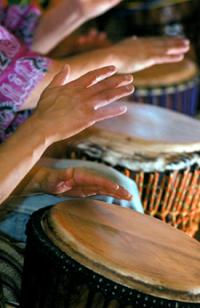 (nothing to do with choppers or tomahawks)

Feeling a bit cheesed-off the other day after a Djembe drumming practice at which my drum teacher had failed to define for me just how my sense of timing/ tempo / accent did not come up to hers, after a few hours not exactly fuming but quite deeply bothered (because drumming has become pretty central to my life and my sense of well-being), I got out my favourite Tarot of the Origins deck in order to make sense of / get to the heart of the “problem.”

I hit upon a five-card spread: three cards laid out in a vertical line, representing (from bottom to top) what’s going on from the teacher’s point of view — its origin (card 1: the Four of Jewels); the heart of the situation (card 2 and the central card in the layout: The Mother); and its implication / outcome (card 3: the Five of Jewels).

This vertical axis was “crossed” by a horizontal line of three cards representing: what to do and my input into the situation — its origin (card 4: the Star); the heart of the matter (the shared card 2 as above: the Mother); and its implication / outcome (card 5: the Hermit). 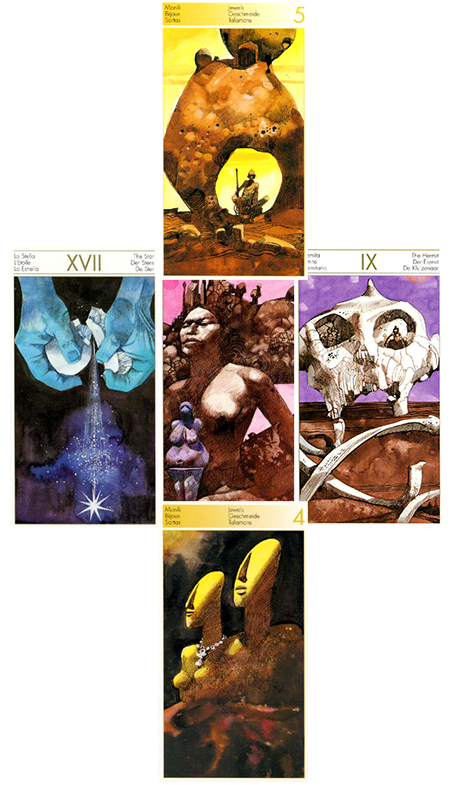 As ever, I turned up the cards one by one with a mixture of trepidation (how could this possibly work) and faith (experience has taught me that the cards virtually always make sense of the question), and yes, there it was, laid out in pictorial / symbolic form: central to my dilemma is the fact that my teacher is an “earth mother” figure to me (She is married with two children who are the central focus of her life) and if I could have chosen my mother, this is who I would have chosen as the ideal Mother. 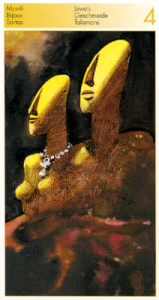 The vertical axis is built from the suit corresponding to Pentacles – the Earth element – and, yes, my teacher’s approach to drumming is a practical, down-to-earth one.

There’s a progression from the Four to the Five, expressing the idea that matters are moving in a ‘natural’ direction, as they ‘should’ do – so i needn’t worry or actually ‘do’ anything to change the way we are behaving (though, of course, understanding what’s going on is extremely helpful and reassuring, and is the whole purpose and value of carrying out the reading).

What more do these three cards add?

Well, the image on the Four is of two statues, with a sense of presence (one of the suggested keywords for this card in the LWB), which to me brings in notions of perfectionism (the figures are very smoothly finished) and of course decorative.

This reminds me/confirms that my teacher is indeed a perfectionist and strongly motivated to create what she sees as a beautiful drumming sound. 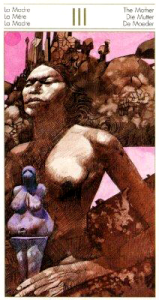 That there are two statues, paired, but that they are side-by-side, facing outwards, rather than towards each other, tells me that drumming is for her a moving beyond her marriage, and that the marriage is a solid foundation and springboard from which she can reach out and develop creatively.

The figures on both the Four and the Mother face to the left (the past, for me) to remind me that where she is coming from is at the moment more important to my teacher than where she is headed.

The Mother card features in the background a large calm body of water.

This suggests strong links to the great African drumming tradition that is important to my teacher. She is always conscious of a historical/cultural framework that underpins all the work we do.

The female figure is an unsmiling one, reflecting a kind of underlying austerity in her approach – albeit relieved by a winning sense of humour. 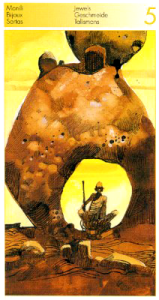 The top card, come to think of it, also has an austerity reference: traditionally (in the Waite deck) the Five of Pentacles bears the image of two homeless figures shut out in the snow.

But in this deck, there is a kind of stone shelter protecting a solitary seated “explorer” figure (a clear visual echo of the final card in the layout, the Hermit).

As shorthand for a bundle of personality traits, I think of this as a Cancerian influence that again echoes the earlier maternal theme.

Turning to the horizontal axis, the line begins with a picture of two blue hands striking a spark from stone. A lovely clear representation, for me, of “cold” hands — my drumming technique maybe lacks a kind of warmth or liveliness in interpretation (in fact I do seem to concentrate on technique rather than expressiveness) but also a hint at potential for greater creativity. 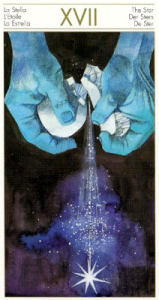 There’s a spark there waiting to be (re-)discovered. That the card is the Star carries a real sense of optimism, of dreams that will be fulfilled: all good stuff and providing much-needed encouragement for me.

Not to mention the notion of fire stolen from the gods – an idea to which I need to give more thought to see its significance here.

The Mother’s headdress merges with an architectural-looking rocky scene behind, which to me symbolizes not only mental connectedness to the wider traditional structure but also intellectual activity in general – and a need to find a balancing emotional connection.

The final, Hermit, card is about searching through myself for the path I need to take; solitary research and a kind of abstinence. 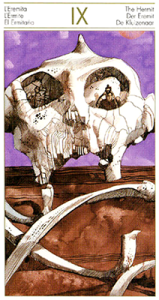 With a colour scheme of purple and white (colours that for me represent power and emotional depth) the card image is of a bony skull with a pointed crown, standing for an intellectual approach.

The bones bear what could be words or hieroglyphs – again about language.

There is a suggestion of a broken jaw (some sort of handicap in relation to communication) and a look of craziness  – both themes that I recognize, as is the hint of Taurean stick-in-the-mud character traits.

Looking over the spread as a whole, I see that cards 3 and 5 have very similar main design elements, reflecting to me a reassuring shared objective between my teacher and myself, however much our musical instincts may sometimes seem to be at variance.

The other striking fact about the spread is that the horizontal line is composed entirely of cards from the Major trumps, which indicates that it is my contribution to the situation that is playing the greatest part in the problem and needs to be adjusted. 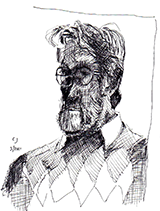 Charles has consulted the Tarot for himself and friends for many years. He sees it as a way of tapping in to our own internal wisdom and finding the answers that we already know, at a deep level, to life’s many quandaries. He’s a keen collector of tarot decks and an endorsed reader and member of the Tarot Association of the British Isles. He’s also a published poet, and editor for the quarterly poetry magazine Obsessed with Pipework.

His passion for drumming extends to a Djembe drumming group and active community involvement. For more information on Charles, check out his Blog or visit the Flarestack Publishing website. To speak with him about his availability for private consultations, please contact him directly.

The deck and images used for this article are from the Tarot of the Origins series by Sergio Toppi. This is a Lo Scarabeo deck, published by Llewellyn and currently out of print. Check out Charles’ review of this deck on Aeclectic.net.

Tagged with: 4 of pentacles, 5 of pentacles, charles johnson, llewellyn, lo scarabeo, tarot of the origins, the empress, the hermit, the star
Posted in: Articles, Blog, Guest Blogs, PCM, Tarot