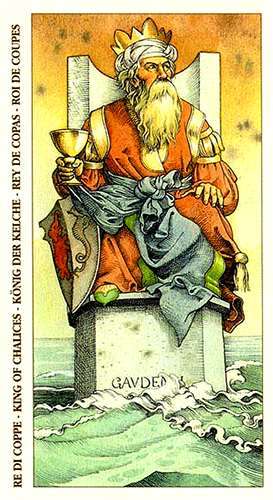 Today’s card — the King of Cups — is all about getting in touch with your emotions and learning to express them in a healthy mature manner.

The Kings — as with all of the court cards — will often describe an individual entering your life as a facilitator for an important lessons. In this case as it’s Cups (called “Chalices” in this deck) that lesson refers to the realm of feelings, emotions, instinct and intuition.

The King in this version is seated on a throne that rises of the ocean like a pedestal. His robes are ornate although somewhat weathered. His crown and his chalice are both gold. An elephant and a seahorse adorn his shield — a clear reference to his reign over land and sea.

Although this King is kind and compassionate, he’s nobody’s fool. He’s not easily persuaded or manipulated and he doesn’t get caught up in maudlin sentimentality. The seas around him may be turbulent, but he maintains his calm as he keeps a watchful eye on the horizon.

The King of Cups encourages you to be compassionate while still maintaining an air of authority. It speaks of developing a clear emotional radar without becoming wishy washy. And it speaks of getting a better understanding of your emotions without becoming overpowered by them.

If this is someone who has entered your life, pay attention to what he or she has to teach you. It may be as simple as observing how others conduct themselves in emotionally-charged situations. And it may be as complicated as trying to navigate the murky waters of manipulation, projection and denial.

You may be experiencing strong emotions yourself as they unexpectedly bubble to the surface. If this is the case. take a page out of the King of Cups’ book and try to deal with them with wisdom, grace and maturity.

The card used for today’s tarotscope is part of the Tarot of Durer series which pays homage to the German artist of the Renaissance era, Albrecht Durer. Written by Manfredi Toraldo and illustrated by Giacinto Gaudenzi. This is a Lo Scarabeo deck, distributed by Llewellyn.