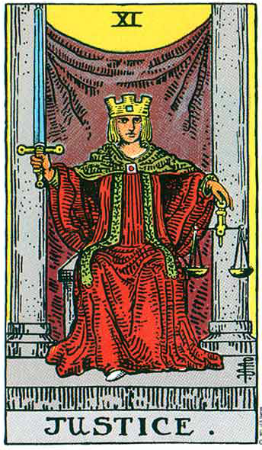 What is your best way forward?

What options do you have?

The Justice card implies you are ready to face a situation head on with logical thought processes.

The scales held in the left hand show a balancing of all the facts whilst the sword in the right hand shows you are ready to speak with conviction once all of the facts have been weighted up.

The situation around you does not need over emotional input for you to gain a satisfactory outcome.

You must use your mind and intellect to access the outcome you are hoping for.

This may mean you need to seek counsel with a professional who can help you with your problems and tip the scales of justice in your favor. 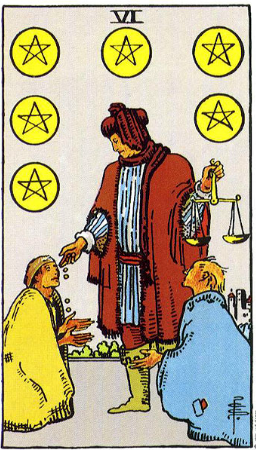 Look at the man in the red robe and notice what his hands are doing. In his left hand he holds scales as if there is a need to balance what he does and doesn’t give away.

Before him are two men on their knees waiting to benefit from his decision which is made intellectually rather than emotionally on how much help he can give to these men.

From his right hand he drops coins into the waiting hands of a man in need.

The second man in need of help holds his hands out and waits his turn for assistance.

Do you feel like you are spending more money than you are earning?

Or perhaps someone owes you money and you are in need of it right now.

Make sure all your accounts are in order and everything balances. 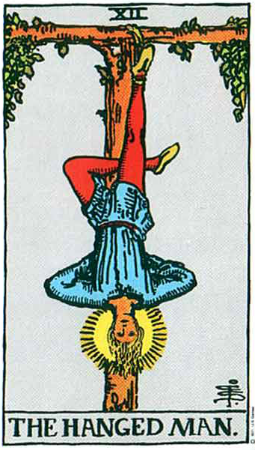 Sometimes you have to go deep within yourself to understand what is really going on around you.

The card of The Hanged Man shows us that we need to sometimes go through a bit of a dark tunnel to find out how we really feel on a situation.

The saying “there is light at the end of the tunnel” holds so true for this card as can be seen from the yellow halo around the man’s head.

His features show he is calm and content whilst the halo implies he is having a “lightbulb” moment within his thoughts that will lead him out of where he is at right now to a better and brighter future. 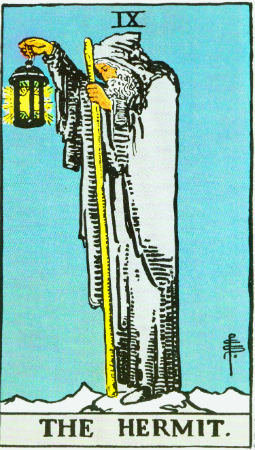 This card shows a man who, as the name Hermit implies, is on his own.

The Hermit card stands for the zodiac sign of Virgo and just like a Virgo the Hermit is wise, steadfast and logical. He walks across an icy surface but he is looking at where he is going.

He is shining a light out before him so he sees the pitfalls and takes action accordingly to avoid any unnecessary harm that may befall him.

The star shines brightly within his lantern to show him the way and his stave in his other hand helps him keep his balance.

Any situation you are facing just now needs the type of clear, calm logic that this card signifies.

You may need to do something on your own but you will learn a valuable lesson from it. 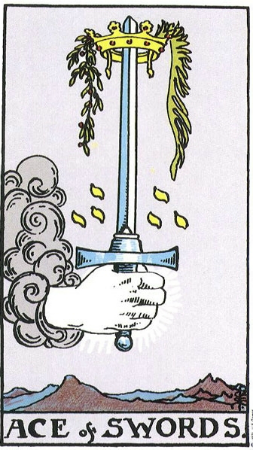 The suit of swords in the tarot signifies intellect and the mental plane.

See how the illuminated hand comes out of the swirling grey clouds and firmly grasps the sword.

That is what you need to do right now.

Get hold of your thoughts with a firm grip and wield them to your own advantage.

If you can do this there is a prize for you as can be seen from the crown at the tip of the sword just waiting for you to take it.

Others may rule with brute force but this card shows that brute force is not needed when you have your will and intellect in line then anything is possible. 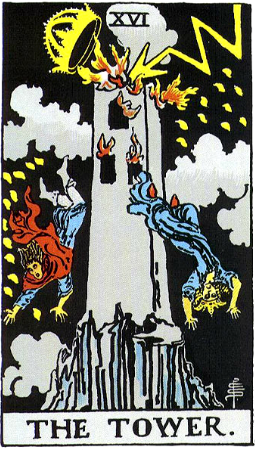 A situation is on the verge of blowing up around you.

If you are in the center of something like this just now it is like being in the eye of a storm as you can’t see what is going on around you through all the debris that surrounds you.

This may take the form of harsh words, events out of your control, arguments and break ups.

Whatever form it takes you are in for a bumpy ride and need to take stock of what your next step will be because if you stay within the chaos of the Tower you will not be able to gain a vantage point from where to begin again. 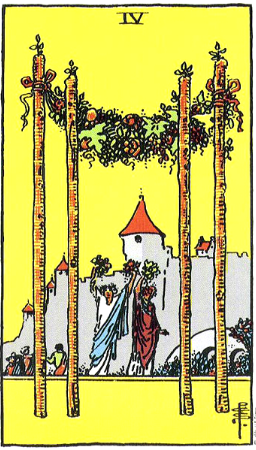 Happiness abounds around you especially when it comes to family ties and feeling safe within your home.

This card can also stand for a home you are thinking of buying and contracts going through smoothly within transactions.

The man and woman stand side by side in front of a home showing a united front as children play in the background.

The 4 wands shows stability and if this has been missing from your life look to what you need to make this happen.

This may be going back to your roots, setting down new roots or simply looking at what you need to feel some stability in your life just now. 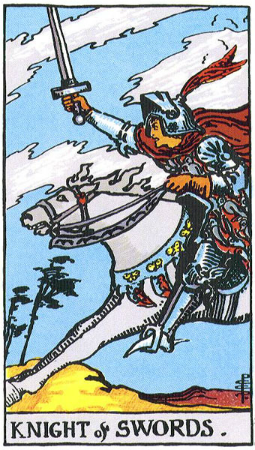 Life is fast with the Knight of Sword. If you blink you may miss him. He rides into your life on a white horse charging with his sword held aloft giving the impression he is going into immediate battle.

He may well be going into immediate battle however it will not be with his sword it will be with his words as swords rule intellect and the mind.

For this reason you need to be on your guard that a male in your life does not attack you verbally causing friction and fall out in his wake.

To give you an idea of how hell bent he is on getting his point of view across look at the trees in this card they are swaying towards the Knight of Swords which means he is riding against the wind.

This is not a man who is going to change his mind in a hurry. Give him some space till he calms down. 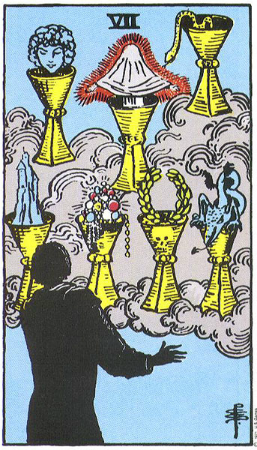 Look at all the pretty gold cups lined up some with gifts of jewels, snakes, serpents and other goodies.

Which would you choose if you had the choice and is the choice clear? That is the question in the 7 cups.

All is not as it appears. There is confusion around and any decision you make doesn’t seem like the right decision to make.

Where exactly do you start and where do you end and how does your decision affect everything else?

If you find yourself in a situation like this where you can’t trust your instincts or that of those around you then do nothing until the mist clears.

Remember all those pretty gold cups I was speaking about at the beginning… don’t focus too carefully on them because the real person you should be looking at on this card is the figure in black…who is he and what is he going to do next and why have you allowed him to manipulate you with promises that have so far not materialized. 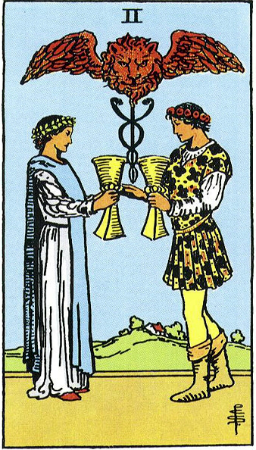 Love is in the air for you just now with all the benefits the 2 of cups can bestow on your love life.

The 2 figures in this card, a man and a woman, stand facing each other. Each holds on to their own cup as the male holds out his hand to the woman.

Did you know that cups in the tarot stands for emotions and the image on this card shows the man holding his hand out to the woman in a gesture that says:

take what I have to give whilst she also offers her cup (love) freely to him.

This card shows a time in your love life where feelings and emotions are flowing freely, reciprocation is offered to each person and there is no holding back when it comes to feelings. 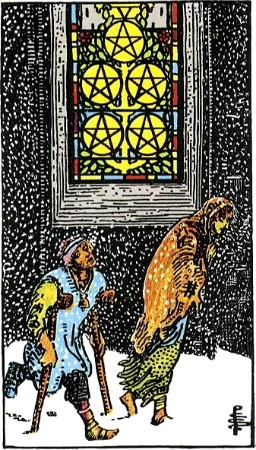 A woman is walking away from a man.

She has little to show for herself other than the strength of will in her decision that she is leaving him. He tries to follow behind her but he is on crutches and cannot keep up.

This card often comes up at the end of a relationship when it is too late to turn back the clock and fix things.

The woman has made up her mind and the man is left feeling as if he can do nothing to change this.

I often see this card before the woman decides to leave.

If you are in a relationship where you don’t know what to do next it may be that your thoughts start to change around the situation and you find yourself moving forward rather than going backwards. 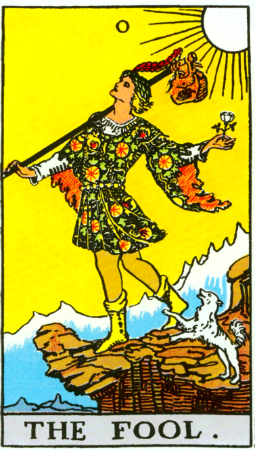 The first card of the tarot pack, the Fool, shows a young man not looking where he is going and about to head over a cliff. Sound familiar?

It may be that you are oblivious to what is around you and about to walk into a situation that you are totally unprepared for.

Your head is in the clouds and your mind racing at 100 miles an hour about something else rather than what you should be truly looking at and thinking about.

There is purity of mind, thoughts and actions in this card also as the white rose of innocence is held in the Fool’s hand.

Just be careful that your innocent gesture isn’t misconstrued as something else and if this sounds like the type of behavior someone else is using towards you then perhaps give them a second chance as they truly do not know what they are doing or where they are going.

this week’s deck is the Rider Waite Deck, created by Pamela Colman Smith and © US Games

Our Tarot Scopes are now syndicated! You can also find them on the following sites:

Don’t forget to check out this month’s Horoscope too!