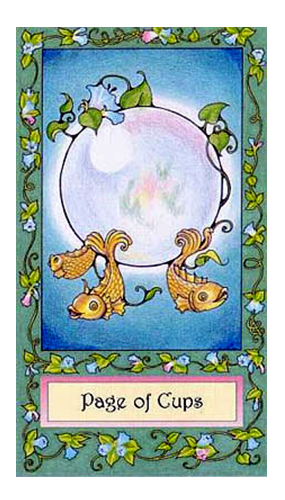 The Moon is in Pisces (and void of course) today until it moves into Aries mid afternoon.

While you may feel a bit like a fish out of water (courtesy of the VOC Moon), the Page of Cups encourages you to push past your fears and uncertainties and take a leap of faith.

The Page of Cups refers to a sense of child-like wonder and enthusiasm that prompts you to throw caution to the wind and follow your dreams. It’s an exuberant, unrestrained and joyful energy that stems from the expectation that you’ll succeed, rather than worrying that you might fail.

Look at the gleeful little goldfish swimming around the orb on this card. Is it a giant luminescent pearl? Or are we viewing them from above as they leap to freedom from the confines of their fishbowl? It’s all a matter of perspective.

The Page of Cups is fearless, because he (or she) doesn’t know that there’s any real danger out there. And as such, s/he’s unlikely to attract it. S/he knows instinctively that the Universe is abundant and that the well will never run dry.

From a feng shui perspective, three goldfish are said to represent fortune and prosperity. And the Page of Cups is often associated with receiving good news.

Pay attention to the messages your receive today — it could be a letter or a phone call, or it could words of encouragement or appreciation from others. Whatever it is, know that it’s spoken from the heart with no expectations or agendas.

Don’t underestimate the power of your own words either. As the Page of Cups can be unfiltered, you want to make sure that you mean what you say today, and that you’ll mean it still tomorrow. 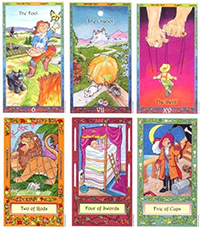 Dorothy Morrison has written numerous books on magic and witchcraft, which are available (including autographed copies) directly from her website.

The Whimsical Tarot is a child-friendly deck, published by U.S. Games.