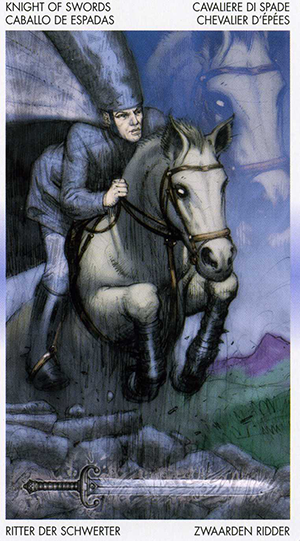 The Knight of Swords is a no-nonsense individual who’s completely focused on attaining his goals. He’s fearless, driven and competitive and is not about to let anyone (or anything) stand in his way.

As with all court cards this can refer to someone in your life, a frame of mind you need to adopt, or it can refer to you personally. Either way, it’s about someone going after what he wants with the willful drive and determination that all but guarantees success.

There’s often a sense of urgency associated with this card. There’s a need to make things happen now, to get the ball rolling and to strike while the iron is hot.

In this version of the card, the Knight and his stallion charge through the countryside toward their destination. The speed with which they ride blurs the hillside behind them, as the Knight’s cape billows in the wind. The landscape itself is dull and dreary: it looks like it’s pouring down rain. Still they charge forward, past the rocky terrain and over the Sword that appears as a hurdle at the base of the card.

If this is someone in your life right now — and especially if you’re at odds with him — your best bet is going to be to just get out of his way. This isn’t someone you can reason with or who will be deterred by emotional displays.

He may however represent an energy or attitude that you need to learn to embrace. If you’ve been wavering in your convictions, this guy is here to show you how it’s done.

As with all the cards in this deck, there is one element reflected. In this case it’s the stallion’s face, juxtaposed against the backdrop of the dreary sky. It’s larger but somehow less daunting in that light, and although it’s an exact replica, it appears much softer and gentler.

With this in mind, you might want to counter some of that Knight of Swords aggression today with patience and sensitivity. it can help you to rein in the wilful defiant individuals you encounter, and can help you to temper those qualities in you.

The card used for today’s Tarot Scope — Knight of Swords — is part of the Tarot of Reflections by Francesco Ciampi published by Lo Scarabeo and distributed by Llewellyn.