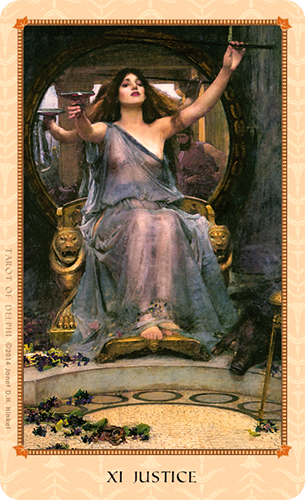 Today you may find yourself needing to make some very difficult decisions.

The Justice card refers specifically to knowing (and acting on) the difference between right and wrong. But it also usually involves finding a middle ground between opposing forces: cause and effect, action and consequence, head and heart, etc.

In this version of the card — from the divine Tarot of Delphi — we meet the goddess Circe as she offers a cup of her magic potion to Odysseus.

The potion was meant to lull him to sleep and put him under her spell, with the wand in her other hand poised to turn him into swine.

But Odysseus had been forewarned by Hermes and disarmed her before she attacked. He fought cunning and treachery (hers) with logic and strategy (his), exacting the release of his men and thus Justice.

The Justice card calls for you to look at all sides of a situation before you make a decision, especially if the “right answer” is unclear.

You may have to remove yourself from the equation completely, or detach yourself enough from any personal investment to make a fair determination.

It may be a situation that you’re personally involved in, such as a relationship that tugs at your heartstrings but is not in alignment with your principles. Or you may be asked to mediate a disagreement among friends or family members.

It isn’t about choosing sides. It’s about being able to tap into the “truth” objectively and impartially. In the end you’ll have to live with the fallout from your choices — for better or worse. So be sure you know which side of the fence you’re on before you take a stand.