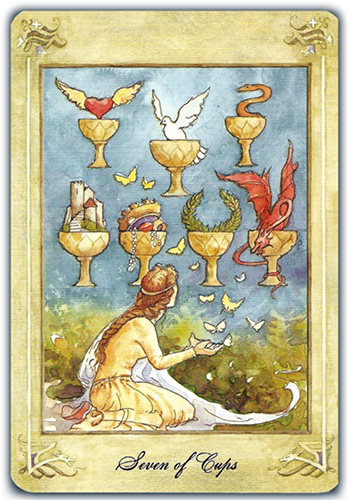 Today’s Venus / Jupiter square may see you with so much going on and so many different options available to you that staying on track with your goals becomes a challenge.

You may feel like torn by competing interests and pulled in different directions — either away from the things you really want to do, or towards the kind of mindless diversions that cause you lose sight of your priorities.

The Seven of Cups is a card of temptations, often fueled by irrational thoughts or fantasies. There can be too many options available, which makes it hard to decide. But it’s often a case of wishful thinking and foolish day-dreaming that can interfere with actual progress.

The woman in this card gazes up at Seven goblets, each more tempting than the last. There’s a snake, dragon, wreath, dove, castle, treasure trove of jewels and a winged heart. These are tied to the Seven deadly sins and in fact this card is called “Debauchery” in some decks, referring to the superficial appeal of things that most of us only think will make us happy.

There are elements of seduction also inherent in this card. Being seduced by something intangible or just out of reach, or being lured in by a fantasy that falls short in the harsh light of day. Notice the butterflies luring the woman toward all of the enticing representations of fame, glory, power, wealth and acclaim, which are just hollow victories in the end. 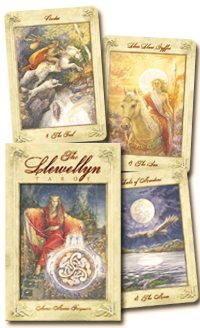 also offers an option for a free tarot reading on the Llewellyn website.

If you would like to schedule a session with either of us, there are two ways to go about it.  You can either purchase time either per minute (via Click4Advisor) or in blocks of 10-, 30- or 60-minutes (via PayPal). If we’re not showing as available, or if you want to purchase blocks of time through PayPal, please feel free to email us:
Tagged with: 7 of cups, llewellyn, llewellyn tarot, tarot, tarotscopes
Posted in: Daily Tarotscopes, MelandChris, Tarot, Tarot Scopes