In general, Mercury retrograde relates to “problems” associated with Mercury-ruled areas. One of the major areas is communications, such as written and spoken word, as well as your understanding of either of those. Communications go awry and misunderstandings abound, because people don’t always make themselves clear and because people hear (or read into) things differently than was intended.

It’s not a good time to make plans, and if you must you’ll want to have a Plan B in place just case the original ones go awry. If you must travel don’t pile connecting flights on top of one another and double check your rental car arrangements before you leave.

It’s not the time to sign contracts or make Mercury-ruled purchases either — so hold off on buying a new computer, cell phone, car or entertainment center.

What kinds of things can and should you do during a Mercury retrograde? In general, anything that needs to be revisited or revised is a good start. It’s an excellent time to go back over a project that needs fine-tuning for an example, as you’re bound to find mistakes you overlooked the first time. It’s a good time to update or revamp your resume. it’s a good time to let someone know you’re sorry for past deeds or to reach out to someone that you have unfinished business with. 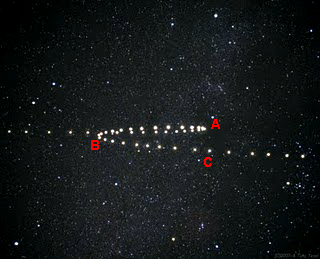 Looking at this diagram you can see the path of Mercury’s apparent motion as it traverses the night sky. It moves from East to West, stopping at point A (the actual retrograde), moving backwards to point B (where it will station and turn direct) and then moving forward to point C (the degree it originally retrograded at) where it will continue on in direct motion.

The point from B to C — which begins before Mercury even goes retrograde and ends well after it goes direct — is called the “shadow” period. This starts at the degree that Mercury will return to while in retrograde motion (B) and ends at the degree at which it first went retrograde (C).

This entire period — from start to finish — is almost 8 weeks long!

This cycle’s shadow period starts on January 23rd and ends March 20th. Let’s break it down. Mercury stations and turns retrograde at 3°20′ Pisces — just about 1° away from Neptune (at 4°26 Pisces) on February 6th at 21:43 GMT. The area in your natal chart where this degree falls will most likely be affected by typical Mercury retrograde themes. In general, Pisces is a very nebulous archetype that relates to intuition, inspiration, dreams and fantasies, the unconscious mind, drugs / alcohol and other forms of escape, religion, psychic perceptions, creativity, mystery and the unknown. These areas are all emphasized by the conjunction to Neptune and will likely be emphasized during the onset of this cycle.

The Pisces symbol is the “Fish” or more accurately two fish bundled together and swimming in opposite directions. They’re said to be swimming toward God and away from God or separating and reuniting (simultaneously) with the Source. An interesting note when considering the Piscean dual desires of the soul is the Sabian Symbol for that degree: “Heavy traffic on a narrow isthmus linking two seaside resorts.”

Mercury stations again on February 28th at 14:00 GMT at 18°09′ Aquarius. This is the degree that started it all — the onset of Mercury’s shadow period — on January 23rd. At that point, it will have moved approximately 15° (backwards) from its starting point and will be turning direct again. The Sabian Symbol for this degree is “A forest fire quenched.”

On March 20th, it finally crosses its shadow point and completes this retrograde cycle. The next one won’t occur until June 8th.

As stated above, what you can expect in a Mercury retrograde cycle is for things to not go exactly as planned. Communications go awry, misunderstandings erupt and electrical or communications devices fail. Schedules get interrupted or switched around. Unexpected obstacles or delays occur. Issues, concerns and problems — and sometimes wonderful surprises — develop in the area that the retrograde cycle occurs in your own chart.