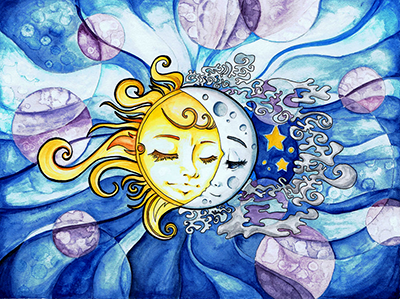 Astrologically speaking, most people know their Sun signs. You’ll hear people say “I’m a Leo” or “I’m a water sign (referring to Cancer, Scorpio and Pisces Sun signs),” or “I was born on the Virgo/Libra cusp.”

And many believe that that’s all there is to it. Nothing could be further from the truth!

The Moon sign is not only just as important as the Sun sign, sometimes it’s even more important.

Eastern astrologers, for example, are more interested in Moon signs than Sun signs, and in many areas almost everyone knows their own Moon sign from an early age.

Sun sign astrology (horoscopes) became popular because the Sun’s zodiacal position is the only one that can be determined by birth date alone. The Sun occupies the same relative position in the zodiac on the same day every year. That makes it easy for laypeople to know their own Sun signs, without having to consult an astrologer or navigate the complicated waters of in-depth astrology.

Even though the Sun is over 400 times the size of the Moon (another reason some place more importance on it), it’s also over 400 times further away. This is why they appear to be relatively the same size from our vantage point. It’s also why we have Solar and Lunar eclipses.

But what does all this mean for you? Let’s look at the astrological implications of both the Sun and Moon:

The Sun represents your ego, will, drive and life-force. It’s where you “shine,” and where you strive to show the world what you’re made of. While it may be the “thing” people notice about you first, this is mainly because it’s the external representation of your spirit. The Sun is hot, dry, masculine and energetic — and of course everything else revolves around it.

The Moon, on the other hand, represents the internal you. Your feelings and emotions. Your needs. Your fears and insecurities. Instinct as opposed to drive. The unconscious as opposed to consciousness. It’s a feminine, preservative, nurturing energy that may be hidden from view upon first meeting.

Because of its synchronous rotation with the Earth, we say that the Moon has a “dark side.” This is relevant to the mystery, uncertainty and hidden or unknown essence of the astrological Moon. 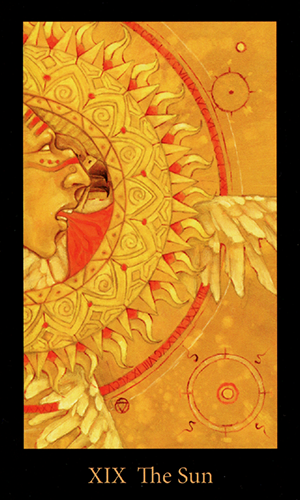 In the Tarot, the Sun and Moon cards are sequential, numbered 18 and 19, with the Moon card first.

The Sun is usually portrayed as warm, vibrant and glowing, just like the Sun in the sky. There’s a happy, optimistic vibe to this card in most decks.

It’s all about shining your divine light and spreading your own warmth and energy around you.

In this deck, the Mary-el Tarot deck, references are made to finding your purpose through an awareness of the gifts already bestowed upon you. The Sun as “God” relates to the essence of God within as well as without.

In a reading, the Sun refers to reward and validation. Happiness. Confidence. Feeling good about where you are and all you’ve accomplished. Enthusiasm about where you’re heading, i.e., the future looks bright.

It can also indicate a trip or vacation, particularly to someplace warm and sunny. 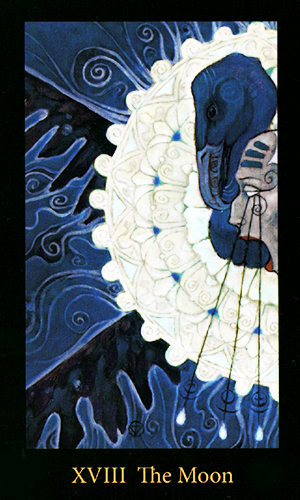 The Moon, on the other hand is often seen as dark, gloomy, fearful and uncertain. Most decks focus on the more negative aspects, ie, doubts, suspicions, insecurities and even deception.

But there are many layers to the symbolism of the tarot, just as there are to the astrological Moon.

In the Mary-el tarot,it’s said to be “yin, soft, passive, and internal, dark, mysterious, the doorway into the subconscious world of dreams, emotions and intuition.”

While the Sun rules the day and light, the Moon rules the night and darkness. Mystery, the unknown, all that is hidden and that lies beneath the surface. This is the realm of the unconscious: that which is churning beneath your awareness and which often translates externally as anxieties, insecurities and fears.

In a reading, the Moon refers to what you don’t know about a situation, what might feel dangerous, and to what brings your deepest fears to the surface.

It’s also a reflection of your own “dark side.”

The Astrological Moon is less caught up in doom, gloom and despair and more focused on instinct, emotions, feelings and subjective responses.

The keywords traditionally associated with each sign can be applied to the Moon with respect to emotions, feelings, security needs and desires. Ask yourself, “how do I express feelings and emotions?” and “what do I need in order to feel secure?”

For the Moon in Aries, emotions are typically not readily expressed. They’re ardent, passionate, impulsive and daring when it comes to expressing their feelings. What do they need in order to feel secure? Action, adventure, spontaneity. Trying something new. Being ahead of the game. Getting caught up in the moment. Expressing their needs without judgment or censure.

Moon in Taurus individuals take a more calm, practical and cautious approach to expressing emotions and feelings. They require comfort, stability and familiarity in order to feel secure. They need physical closeness and security. They’re territorial and can be possessive. They take things slowly, savoring the art of love and romance, much like someone would savor a meal or a bottle of fine wine.

With Moon in Gemini, emotions may be all over the map. This is a dual or mutable sign, which can translate as ebbing and flowing emotionally — or “hot and cold.” They need a lot of mental stimulation in order to feel secure. They’re restless and easily bored, so tend to develop a variety of interests. This Moon sign can be scattered and tangential, which is why they’re so able to remain secure in times of chaos or change.

Moon in Cancer people are virtual gold-mines of emotional expression. Or some might refer to them as land-mines. They can be loving, nurturing, sensitive and caring — or they can be moody, defensive, needy and irrational. What do Moon in Cancer people need in order to feel secure? Reassurance first and foremost. Understanding. Empathy. Compassion. As long as they feel loved and reassured, they can relax and let go of their fears.

For Moon in Leo, love, romance, creativity and self-expression are all important features. They tend to wear their hearts on their sleeves and express their needs readily. What do they need in order to feel secure? Acknowledgment, respect and loyalty. Attention. Validation. They want to be seen as “special:” they’ll purr like kittens when they’re worshiped or adored — but can roar like lions when they’re not.

Moon in Virgo people like to think about what they’re feeling before they express it. They’re systematic and tend to analyze their feelings first, but this doesn’t mean they don’t feel. It means they want to understand their emotions and work on them, rather than just laying them all out on the line. They’re hard-working and dependable and want to be useful to others. They want to feel needed and appreciated.

With Moon in Libra, give and take is of paramount importance. There’s a need for balance in all of their emotional connections. They tend to mirror other people’s feelings right back to them, as long as they’re harmonious and civil. They don’t appreciate (or engage in) any crude or harsh behaviors — and that extends to the expression of feelings. They can be very argumentative, but only when confronting injustice and unfairness. They need cooperation and reciprocity in order to feel secure.

Moon in Scorpio individuals tend to keep their innermost feelings completely under wraps. That is until they get to know you. They’re mysterious, secretive and vulnerable — although most people never get to see that side. What do they need in order to feel secure? Trust is number one. They also need privacy, intimacy, depth and understanding. They need to know you have their backs — no matter what.

For Moon in Sagittarius, the realm of emotions can get a little sticky. There’s only so long that people can gaze lovingly into each others’ eyes — and for most Moon in Sag folks even that’s a little too long. They’d much prefer going off on an adventure or conversing about the meaning of life. They’re optimistic and forthright and appreciate the same in others. They need “space,” freedom and independence in order to feel secure.

Moon in Capricorn people can be emotionally reserved or repressed. Some may misinterpret this as coldness, but this is far from the truth. While they can be emotionally inhibited, this is often a bi-product of absent or unresponsive parents. They do have feelings; they’re just not comfortable showing them. What do they need to feel secure? To be looked up to, seen as accomplished or important. To be revered by others.

For Moon in Aquarius, the expression of feelings can be somewhat foreign. They’re remote, aloof, detached and sometimes unreachable. They filter their feelings through mental channels and approach them objectively. They can be disconnected emotionally, but they do have needs. They need companionship, intellectual camaraderie, like-minded goals and a sense that they’re a part of something bigger than themselves.

Moon in Pisces people are the quintessential representation of sensitivity, compassion and unconditional love. They express their emotions freely, and often without regard for consequence. They’re gentle, self-effacing, self-sacrificing and altruistic. They can be too sensitive and too easily hurt. What do they need in order to feel secure? Deep emotional connections. Acceptance. Forgiveness. Understanding. Harmony. Peace.

While this is far from “Everything” under the Sun and Moon, it will hopefully give you an idea of the significance of the Astrological Moon. Although the Sun occupies the same place in the sky on the same day each year, the Moon moves through the entire zodiac in 28 days. For this reason your Moon sign is not as easily determined. For that you’ll need to speak with an astrologer or look it up on one of the many chart calculators that are available on-line.

Or — if you feel comfortable posting your full birth date (as well as your time of birth if known and birth place) in the comments section below, I’ll be happy to let you know what your natal Moon sign is. For privacy’s sake I’ll edit out your actual birth info before approving it for publication.

the Sun and Moon tarot cards used for this article are from the Mary-el Tarot, designed by Marie White. Used by generous permission.
The gorgeous Sun and Moon painting at the top of this post was also used by permission. Special thanks to Jess Starwood!

Much of the birth data acquired for the celebrity moon signs came from Astrotheme.com

This article also appears on my website Melodie Sheppard

14 comments on “The Sun and Moon: Astrology’s “Heavenly Bodies””