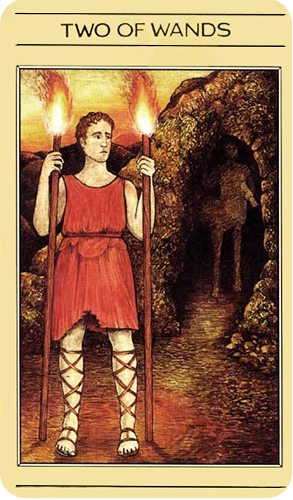 Today it’s going to be all about taking an idea (Ace of Wands) and turning it into a plan of action. The Two of Wands speaks of believing in yourself and your goals enough to take steps toward making something happen.

Mars squares Jupiter today which can make you feel invisible. This aspect is courageous and daring but it can also be a bit reckless. As with all Twos, you’ll have to find a way to balance these two dynamics.

In this version of the card we see Jason — from the Greek myth Jason and the Argonauts — preparing to take the first steps toward reclaiming his birthright.

As with all Twos, this is just one part of a much larger and more complex set of goals. He doesn’t yet know where his journey will lead him, only that this first step requires both courage and initiative.

Here Jason stands just outside of Chiron’s cave, where he’s been raised since infancy. The Two wands are torches in this version, to be used for both protection and illumination.

Chiron is also going direct today. See him peering out from the shadows in his cave? This is a bittersweet moment for him. On the one hand he shares in Jason’s pride and enthusiasm for the journey he’s about to undertake; and on the other hand he knows he’ll miss and worry about him when he’s gone.

Chiron transits are similar in that they can help to clear and heal our emotional blockages (which is a good thing) all the while reminding us of how we acquired them in the first place (not such a good thing).

Chiron turning direct today can help us all become wiser and more aware of the synergy between that which has wounded us and that which brings us insight and clarity. Just as Chiron emerges from his cave to watch Jason set off on his grand adventure, we must all also be willing to make sacrifices for the greater good.

Today’s card — Two of Wands — comes from the Mythic Tarot by Juliet Sharman-Burke and Liz Greene, illustrated by Tricia Newell, distributed by U.S. Games. This deck can also be downloaded as an app for IPhone, IPad and Android devices through the Fool’s Dog website.