Ask the Astrologers: Should I Stay or Should I Go?

What can astrology tell us about the prospects for happiness with different relationship partners? By looking at the connections between natal charts and composite  charts, can we determine who we’re better suited for in a long-term capacity?

That’s the question we’re looking at today. A client (we’ll call her Elizabeth) wrote in asking about her connections to two different men.

The first one is her husband (whom we’ll call John). She’s been married to him for more than 10 years although for the most part she’s been unhappy. The other is a friend (whom we’ll call Mark) who she’s developed strong feelings for over the course of  the last few years, although she’s never acted on them.

She’s worked hard on her marriage but hasn’t seen the same energy put into saving it by her husband. That is, until recently when she asked him for a divorce. This put enough fear into him that he’s snapped to attention and seems to be making a genuine effort.

She wonders if this is only temporary and whether once they settle back into a routine he’ll relax his efforts and turn back into a “jerk” (her words). In the meantime she’s gotten closer to Mark, although they’ve never spoken about their feelings. So her questions are about the likelihood of her marriage not only surviving but improving to the extent that she’s once again happily married, and about the potential for a relationship with Mark should the marriage to John fail.

Her complete birth data (date, time and place of birth) and the birth dates of both of the men she asked about were provided. We didn’t have the birth times for either of these men so we did what’s called a “solar chart” for each of them. So let’s Ask the Astrologers:

I did look and all three charts separately and then compared the two men’s charts with yours. I also looked at composite charts, which are essentially compatibility charts that are created by looking at midpoint connections between your chart and each of these men.

You do have Gemini on your marriage house cusp, which traditional astrologers associated with more than one marriage. And one of the first things I noticed was that your marriage cusp ruler forms the exact same aspect in your chart that it does in Mark’s. In your case it’s Mercury squaring your natal Mars, and in Mark’s case it’s Mars, squaring his natal Mercury.

Additionally, you both also have Venus trine Mars — another astrological recurrence that probably resonates between you as a sense of romantic familiarity.

This is not enough of course to determine compatibility — especially since the Mars / Mercury square is actually quite stressful. But it is interesting to note as this same exact signature repeats itself in your composite chart. More on this later.

Mark is a Libra Sun with Leo Moon and Venus in Scorpio. His Venus squares that Moon, conjuncts Neptune and trines his Mars in Cancer. This is a very romantic and expressive signature, although I think he’s also somewhat passive. He’s hands down a lot more romantic and sensitive than John, and this is a big part of what draws you to him. Those aspects connect (and interconnect) with your natal chart in so many ways.

The composite chart (which I combined using your solar charts since we didn’t have his birth time), also has repeated connections to your natal chart (and his). I feel there are karmic connections here that are so powerful, and which probably pull the two of you together very much like a magnet.

But there are problems here too. The composite chart is not great. The Mercury/ Mars theme in both of your charts is not only repeated in the composite, but it pulls in several other planets.  You end up with a t-square between Mercury / Jupiter, Mars/ Pluto / Uranus, and Saturn. I removed all the other planets from the combined chart to give you an idea of what that looks like: 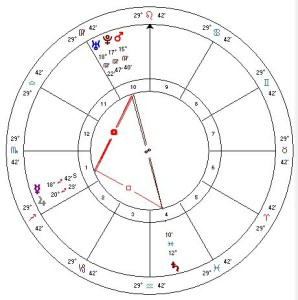 This is called a “t-square” and it emanates from the Mercury / Jupiter conjunction in the first house.

It’s only one part of the relationship (and there are clearly others) but it’s a major aspect that I feel speaks of obstacles that could be preventing the two of you from coming together now or in the future.

In general this aspects can related to communications issues but because the communications planets (Mercury and Jupiter) are conjunct and are in the first house, I’d say this suggests the conflicts are external.

For example, you didn’t say if you work together, but if you do I could see it as representing gossip at the workplace. Another thought is family (Saturn in this case) making judgments that prevented the two of you from being together.

I don’t expect that this is a problem now (and in fact there aren’t any stressful transits to this configuration at present so it’s unlikely it would be an issue now). But it’s such an intense aspect that I would expect it to indicate problems in a relationship when any one of those planets was being triggered by major transits.

This t-square is mitigated by Venus in the composite chart (as it is in both of your natal charts. Venus trines the Mars/ Pluto/Uranus conjunction and sextiles Saturn. The trine basically softens the blow of this stressful aspect, and because it’s Venus, it’s softened with a genuine love and affection.

John is a Scorpio with Libra Moon and Venus in Capricorn. His relationship rulers (Venus and Pluto) are involved in a trine, which is actually a good aspect for longevity. But he doesn’t look particularly romantic. Aside from that aspect (and a trine between his Moon and Jupiter in Gemini) the rest of his chart is pretty disconnected, including his Sun which makes no aspects to other planets, aside from an inconjunct to Jupiter.

He looks a lot less sensitive and romantic and a lot more verbally aggressive, as in blunt, opinionated, sarcastic, etc. We don’t know his birth time, and hopefully he has something rising that would soften this energy.

The composite chart also has a prominent t-square. Since we didn’t have a birth time for him I also combined the solar charts for this composite.

But in this case the t-square involves a very prominent (angular) Sun, Uranus / Pluto and Saturn. Here the issue may be more about personality conflicts, wills, egos, and power struggles.

That Sun / Saturn square leads me to believe this marriage has undermined your self-esteem and that you’re feeling you’ve sort of lost yourself along the way.

There is also a Moon / Mars conjunction in the 12th house in this chart and both of them square Jupiter in the 8th house (not shown here — for the sake of anonymity I didn’t want to include the full charts). This configuration makes a lot of sense to me in light of some things you mentioned privately, specifically the secrecy and hiding of assets.

Of the two composite charts this one is far more difficult, but there are problems with them both. This one seems more internal, and there are fewer buffers here than there are in the composite with Mark. But I also didn’t see things coming to a head in the marriage at this time either.

You didn’t say whether you have children but both of the composites point to “family” being an important factor and the horary chart I did on this pointed to home/ family/ children considerations as well. In one of them the Sabian Symbol was: ” A woman feeding chickens and protecting them from the hawks” and in the other it was “A table set for an evening meal.”

My sense in looking at all of this is that the marriage will survive — for now. It’s far from ideal and I think you’re going to come to a crisis here around December of this year and then an all-or-nothing decision in Sept 2015. At that point, just looking at all the transits in these three charts (as well as the composite charts) it wouldn’t surprise me if you didn’t end your marriage and begin a new relationship with Mark.

I wish you all the best and I hope this has helped to clear some things up for you.

5 comments on “Ask the Astrologers: Should I Stay or Should I Go?”