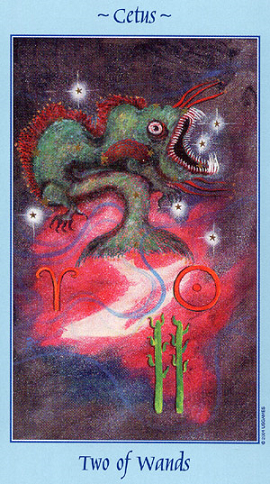 Today’s Aries Sun / Leo Moon combination is perfect for taking the spark of an idea and turning it into something powerful and tangible.

The Two of Wands speaks of that creative life force that propels each of us forward, whether we’re aware of it or not. It may be dormant or unconscious or buried under fear, but it’s there nevertheless.

The constellation referenced by this card — Cetus — is much the same: its borders are just outside the boundaries of the official zodiac; yet the ecliptic passes so close to it and even dips just inside of its borders that the Sun, Moon and planets do cross over from time to time.

The Sea Monster for which Cetus is named carries with it both positive and negative connotations — in keeping with the dual nature of the Two of Wands. In some stories it refers to fearlessness and heroism. And in some it relates to misfortune and calamity.

The Two of Wands is all about getting in touch with your own personal power.  It’s about boldness, bravery and certainty — all of which must be accessed in order to “slay” the monster.

It’s the Sun in Aries’ ability to stand up against fears and refuse to back down. And it’s the Leo ability to ignite those impulses and turn them into something meaningful.

This could be a new career path, a romance, an investment opportunity, or some other creative venture. There may be uncertainty, just as there would be trying to navigate past the Sea Monster’s razor sharp teeth. But the rewards far outweigh the risks when it comes to this card, so take the time to flesh out your ideas as this could be the start of something good. 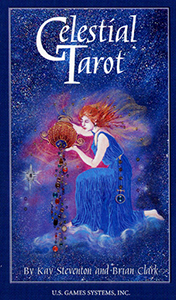 This deck combines in depth astrology with the tarot and , published by US Games.

Kay Steventon also gave us the gorgeous Spiral Tarot and collaborated with Brian Clark on the book and card set Ancient Feminine Wisdom.

Brian is a highly respected Australian astrologer who has written numerous books on astrology and who founded the Astro*Synthesis distance learning program in 1986.