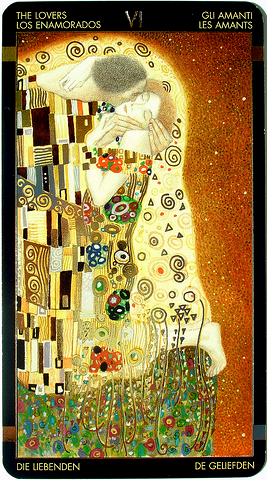 As Venus moves into Pisces today — where it is exalted — you may be thinking about the kind of romantic idealistic love that seems only attainable under the rarest of circumstances.

The Lovers card is actually associated with Gemini (which is where the Moon is today). But the painting that was selected for this version of the card is decidedly Venus in Pisces, with the lovers so entwined in an intimate embrace that they appear to almost dissolve into one another.

This painting, known as “the Kiss,” is probably Klimt’s most famous piece. It is believed that he and his muse Emilie Flöge were the models for this painting.

The Loves card often refers to a decision or a dilemma involving matters of the heart. Perhaps you’re wondering where you stand in a relationship; or maybe you’re questioning your feelings about another.

This card also sometimes refers to a literal love triangle. An illicit affair. A clandestine relationship. Or one that would be frowned upon by your family, friends or church.

You may be torn about whether to proceed with a relationship that’s still new. Or you may be considering throwing the towel in on one that has grown stale and old.

Either way, know that your decision doesn’t affect only you. There may be long-standing repercussions for whatever choice you make, so take the time to weigh the consequences before you decide.

You may have to make sacrifices (Venus in Pisces) to attain your “perfect relationship.” But like the couple in the painting depicted on this card, if you are lucky enough to find it it will all have been worth it in the end.

This card is part of the Golden Tarot of Klimt, written by Atanas Alexandrov Atanassov and featuring the artwork of Gustav Klimt, published by Lo Scarabeo and distributed by Llewellyn.
Check out more daily tarot scopes or visit our Shop.