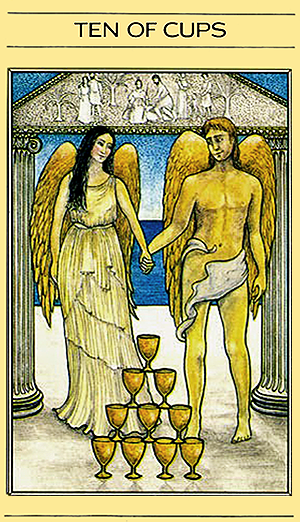 Today you may be thinking about your “happily ever after” in the form of a marriage or soul-mate type relationship.

The symbolism depicted in this card — from the Mythic Tarot’s deck — certainly depicts this type of union.

Here we see Psyche and Eros being joined in holy matrimony, ten golden goblets stacked carefully before them. Psyche has been elevated to Goddess status, her virginal white gown and wings now a shimmering gold. They’re joined together as One, equal in every way.

The Ten of Cups tells you that you’ve achieved something worth acknowledging and celebrating, as seen here in the imagery of this card. It’s about fulfillment and security; a solid foundation of abundance and prosperity, and the sense that you have built something you can take pride in.

But the Ten of Cups — as with all tens — also implies a crescendo or culmination, which forces you to look at the “now what?” aspects of your relationship.

Is it possible to be loved too much or to have so much affection for another that you feel like you’re bursting at the seams? This is the basis of the state of limerence, which is an almost obsessive sense of longing and infatuation — the kind that hurts as much when you’re together as it does when you’re apart.

Falling in love is a beautiful thing. And as long as you’ve got your feet on the ground, it can last a lifetime. But this card also speaks of the capacity to love someone so desperately that you lose track of where you end and they begin.

You want to temper your desires to merge with another with the enough independence and autonomy to sustain one another separately. This is how any of us can be elevated to our own divine statures, by making the sum of the parts greater than the whole.