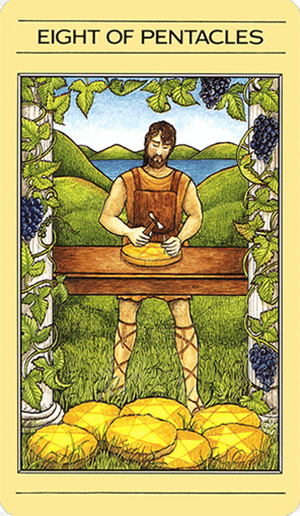 Mercury and Saturn are in sextile today. This aspect is favorable for hard work, discipline and organization. It’s perfectly referenced in the Eight of Pentacles — as seen here in the Mythic Tarot’s version.

The Eight of Pentacles is known as the “apprenticeship card.” It refers to developing craftsmanship and expertise; putting your all into a project and being satisfied with the results. You take pride in your work — whether it’s something you’re in the process of learning or something you’ve done a thousand times before.

In this version of the card we meet Daedalus, who is known for having built the Labyrinth for King Minos. Here you see him perfecting his skills as he labors over Eight golden coins.

You can see his focus and dedicating as he works on the intricate details of each coin. He’s patient and diligent. He knows it takes a keen eye and a steady hand to bring hone his craft to perfection.

This is the essence of the Eight of Pentacles — and of the Saturn / Mercury aspect.

it relates to fully investing yourself in a skill or trade. It’s usually a labor of love. It’s not about seeing work as drudgery, but instead being totally engaged in whatever it is you’re devoting your time to.

The Eight of Pentacles also sometimes has to do with shifting gears — as in finding your calling at a point where you might have already considered yourself well on the road to success in some other profession.

Your challenge today is to embrace that aspect and apply it to your work. Whether that means improving upon something you’re already good at, or learning to master new skills. Like Daedalus in this card, it may just be a stepping stone to something bigger and better down the road. But taking pride in your work and honing your skills now will see you one step closer to those goals.