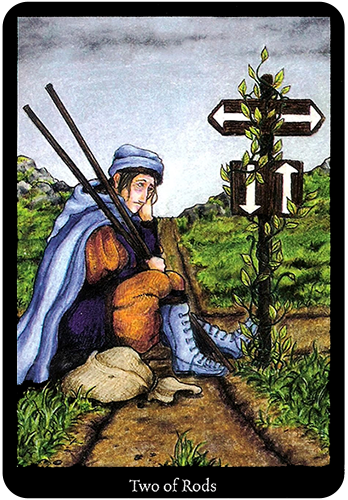 You may feel like you’re at a cross-roads today — fretting over decisions that are weighing heavily on your mind, and afraid of making the wrong move.

This version of the Two of Rods — from the Anna K Tarot — illustrates this dilemma beautifully. There are several different paths to take but no clear direction. And no idea what is on the other side.

In this respect the Two of Rods is as much about trust as it is about action. Trusting that whatever path you take will lead you to where you need to be.

Mars and Uranus are in inconjunct today. This is a rather tense aspect that can see you at odds between what you are motivated to do (Mars) and whatever curve-balls the Universe wants to throw your way (Uranus).

It may be frustrating, but look at the figure in this card. He’s not getting anywhere by plopping himself down on the side of the road and worrying about taking the wrong path. He may be avoiding pitfalls by sitting there doing nothing, but he’s also missing out on potential opportunities.

The Two of Rods says that while you may not have all the information you need to make an informed decision, you’re still better off doing something rather than allowing yourself to become paralyzed by fear. This card encourages you to pick yourself up and dust yourself off and be willing to take a stand.