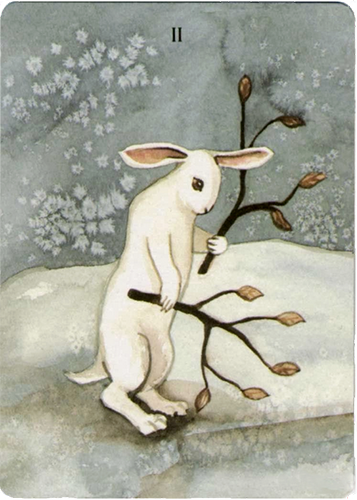 Are you in need of more confidence and self-assurance these days? As Venus and Saturn inch closer and closer to their upcoming square aspect, you may be starting to feel overwhelmed by the weight of your own insecurities.

The Two of Sticks is the Rabbit Tarot’s version of the Two of Wands. He looks pretty dejected here out there in the middle of a snowstorm without a friend in the world. The sticks he’s carrying don’t seem heavy at all, but they’re somehow preventing him from moving forward.

This card indicates  a struggle with keeping things in balance in your life. You may have great ideas and plans for the future (as seen with the one branch held high in the rabbit’s hand) that get weighed down by practical concerns — money, time, scheduling conflicts, etc. Or you may be held back by a lack of faith in your own abilities.

The Two of Wands is traditionally associated with daring, courage and initiative — which this little guy could use in spades. And he’s going to have to find them if he wants to get out of the rut that he’s in; otherwise he’ll freeze to death under a blanket of uncertainty and doubt.

The Two of Sticks says you’re going to have to put your neck on the line sometimes in order to get what you want out of life. You can’t let your fears (of making the wrong move or not being fully prepared) get in your way. If you’re wavering over a decision due to your own insecurities, consider the consequences of not choosing at all. You risk squandering important opportunities if you let your fears hold you back.