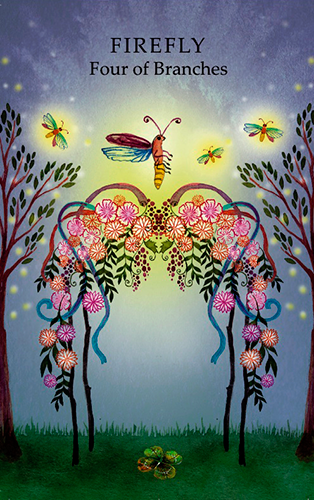 Today is a good day to look around you and count your blessings for the world you’ve created and the loved ones who surround you.

You could be the recipient of good news, or an unexpected surprise; or you may be thinking of celebrating an achievement that involves friends, family and those who’ve supported you along the way.

The Firefly (or Four of Wands) — called the Four of Branches in the Animal Wisdom Tarot’s version of card — heralds the completion of the first stages of an ongoing project and acts as confirmation that things are moving forward.

It says that you are making progress, building on something that’s well on its way to being established, and have every reason to feel good about the foundations you’ve already laid down.

The Firefly can represent a joyous celebration: a marriage, a promotion, the birth of a child. It tells you that “this is only the beginning” of something you’ve already established and that it’s bound to just keep getting better.

There’s an archway in this card made up a beautiful canopy of flowers. Fireflies hover above and light the way. A four-leaf clover (symbolizing fortune and luck) rests beneath it and a sprinkling of stars shine in the night sky.

The Four of Wands is represented by Venus in Aries, which is where Venus is right now. It speaks of rejoicing in the moment and keeping things fresh and alive, all the while moving toward the future.  You could be planning a party or casual get-together; or you could be making plans to attend one on someone else’s turf.

Either way, this is a time for rejoicing and celebrating. It’s not a time to isolate or withdraw from social opportunities. Look around you and take note of all you’ve accomplished thus far. Chances are good there’s a lot to be grateful for and a cause for celebration right there in front of you.