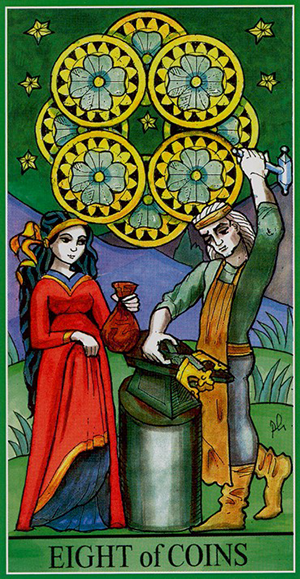 Mercury conjuncts Jupiter today, just before it moves into Virgo — and just before Jupiter does the same, for the first time in 11 years.

These transits are favorable for hard work, discipline and organization. This is beautifully referenced in the Eight of Coins — as seen here in the Dame Fortune’s Wheel Tarot version of the card.

The Eight of Coins is known as the “apprenticeship card.” It refers to developing craftsmanship and expertise; putting your all into a project and being satisfied with the results.

You take pride in your work — whether it’s something you’re in the process of learning or something you’ve done a thousand times before.

The Eight of Coins is all about dedicating yourself to perfection and craftsmanship. It relates to fully investing yourself in a skill or trade. It’s not about seeing what you do as drudgery, but being totally engaged in the process. In that respect it’s not “work; it’s a labor of love.

That doesn’t mean there’s no return on your investment. As you can see in this image the man is being paid for his work. But his focus is on his craft rather than the sack of money coming his way, which is as it should be.

The Eight of Coins can also refer to shifting gears — as in finding your calling at a point where you might have already considered yourself well on the road to success in some other profession.

Your challenge today is to embrace that aspect and apply it to your work. Whether that means improving upon something you’re already good at, or learning to master new skills. Like the figure in this card, it may be a stepping stone to something bigger and better down the road. But taking pride in your work and honing your skills now will see you one step closer to those goals.

END_OF_DOCUMENT_TOKEN_TO_BE_REPLACED 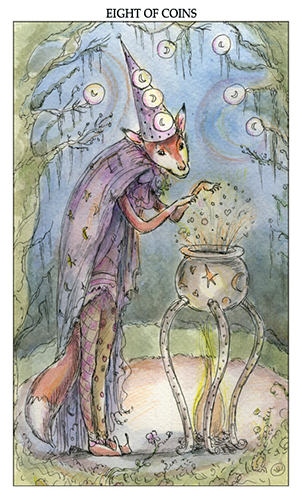 As Mercury enters Taurus today, you’ll be thinking about being more productive. About honing your craft and turning your skills into something you can be proud of.

The Eight of Coins is a card of craftsmanship — however that might apply to you. It can be as simple as being 100 % focused on your work and wanting to show the powers that be your level of dedication and service. And it can be as innovative as taking something you are uniquely capable of and turning it into a career.

In this version of the card — from Paulina Cassidy’s whimsical Joie de Vivre Tarot — we see a Fox in wizard’s attire conjuring up a magic potion. He’s focused and dedicated, standing over the bubbling concoction as the cauldron sizzles and boils.

Five disks hang from the limbs of the trees behind him and three more are pinned to his pointy hat. He’s so good at what he does he can afford to take his eyes off the mixture. But he doesn’t dare step away: the successful completion of this project depends on his being right there to make it happen.

The Eight of Coins is also known as the apprentice card. It refers to taking on an interest — a brand new one or a lifelong dream — and devoting yourself fully to it. It doesn’t have to be career related, but because it’s a labor of love wouldn’t it be great if it were? Doing what you love and seeing the money follow is something we all aspire to achieve.

The Eight of Coins can refer to an all-work / no-play mentality. But this is all relative, as the hours that you’re putting in will likely not feel like “work” at all. Not if you truly love what you do. This is about being fully engrossed in what you’re learning, creating or developing.

Take some time today — even if you’re still somewhere punching that clock — and think about what you really want to be doing. Chances are good that once you start seriously thinking about your options, taking steps toward making them happen will come to you naturally.