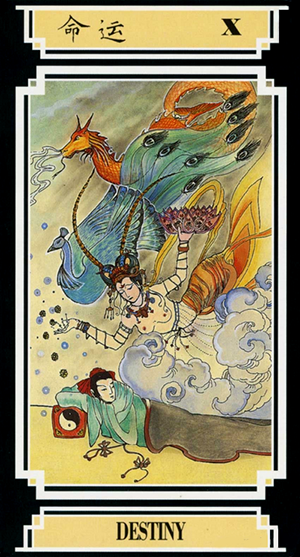 You may noticing synchronicities all around you today as the Sun squares the Nodes and the Destiny card — traditional Tarot’s Wheel of Fortune — makes an appearance.

The Sun and Nodes in square aspect isn’t particularly pleasant. It’s what’s referred to in classical astrology as “at the bendings.” This can indicate a period of crises with emphasis on the concept of fate. As the Sun represents the Self, the Will and the Ego, and the Nodes represent karma, fate and destiny, this can literally translate as a crisis in consciousness.

You may be dealing with intrusive thoughts or moments of uncertainty that cause you to question what is real and what is not. You might be asking yourself “Who am I?” “What is my purpose? “Where am I heading?” “Am I awake or am I dreaming?

The man in this card — from the beautiful Golden Dragon Tarot — appears to be sleeping. The goddess rising from the fog of his dreams seems to be sprinkling something over his head to soothe his fitful rest. This is probably Quan Yin, goddess of Compassion and Mercy, as evidenced by the Tiger, Peacock and Dragon animal totems also present in this card.

Each of those animals represent a different state of consciousness and a different place on the Wheel. The Tiger represents the base, primal and survival instincts; the Peacock represents luxury, beauty and earthly pleasures and the Dragon represents power, victory and transformation.

If things aren’t exactly going as planned for you right now, you may have to look at the bigger picture. The Sun / Node square says that you may not appreciate the hand that’s been dealt to you, but the Destiny card says that the Universe has something entirely different in store. Sometimes we blame ourselves for the down times (assuming we’ve “brought it all on ourselves”) while viewing the up times as outside of our control.

This card — and today’s transits — encourage you to remember that life’s natural rhythms may not always be in sync with your own expectations. And sometimes it takes a crisis (or a night of fitful sleep) to see that for yourself. You’ll have to look at where the actions you’ve taken and the decisions you’ve made have led you to where you are today. In doing so, and in choosing to participate in your own destiny, you can determine where this next chapter leads.