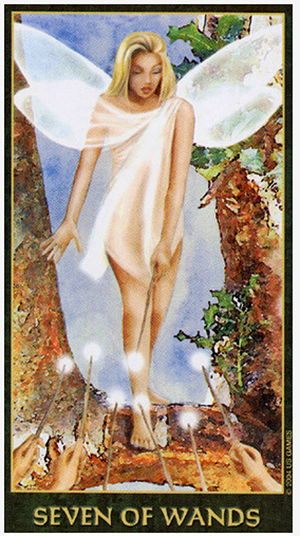 You may feel the need to brace yourself against an attack today, or hold your ground against what feels like perilous opposition.

The Seven of Wands — this version from Kessia-Beverley Smith’s Forest Folklore Tarot — refers to a need to be more alert, guarded and cautious, rather than accepting things at face value.

You may face opposition from others, in the form of competition or outright resistance. You may also feel “under siege:” as in being attacked or ganged up on.

In this version of the card a little fairy stands her ground from a branch that is situated between two trees. It’s clear that she’s outnumbered as she struggles to keep her adversaries at bay. She fends them off with her magic wand, keeping one hand on the tree for support.

The Seven of Wands — like all Sevens — refers to a dilemma that is not going to be easily reconciled. The question is: do you take the easy way out (in this case giving in to the masses and compromising your own integrity)? Or do you hold your ground — like the fairy in this card — and risk further alienating your detractors?

There are issues with boundaries present in this card as well, and it can manifest as feeling imposed upon or backed into a corner. But the same dilemma applies. You have to choose whether to give in or maintain your stance and deal with whatever repercussions result.

Whatever happens today — no matter how this plays out for you — you’re going to be called upon to take the high road. You’re going to be challenged to stand your ground and to not allow yourself to back down. You’ll also have to reconcile a “me against the world” attitude before it turns into a chip on your shoulder.