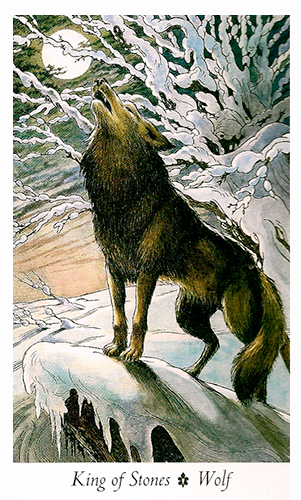 Look at that great big Full Moon the Wolf is howling at in this card. It’s also a Blue Moon and a Super Moon, loaded with Myth and Magic.

The King of Stones is the Wildwood Tarot’s version of the King of Pentacles. He’s an authority figure, a boss, parent, or mentor. He’s a natural leader — whether he’s leading a pack or acting as a lone wolf, as seen in this card.

He knows how to make his presence known without causing too big a ruckus. He may seem imposing but his bark is generally worse than his bite. He’s a steadfast and solid individual who refuses to back down.

The King of Stones also knows how to protect his assets. Whether this relates to material possessions or his family and loved ones, he’s known for being territorial. He’s not about to let anyone to trifle with what he has.

Whether this is someone in your life or an attitude that you need to adopt, the King of Stones is here to teach you the importance of letting your intentions be known. This isn’t the time to cower in the shadows. It’s time to step up and mark your territory, without stepping on anyone’s toes.

Today’s Full Moon is in Pisces, which brings in the idea of following your dreams. There’s a gentler edge to this Moon which makes it more about finding your inspiration that blindly accumulating trinkets. Take some time to figure out what you want, and then go after it with the determination and enthusiasm that gets you howling at the Moon.