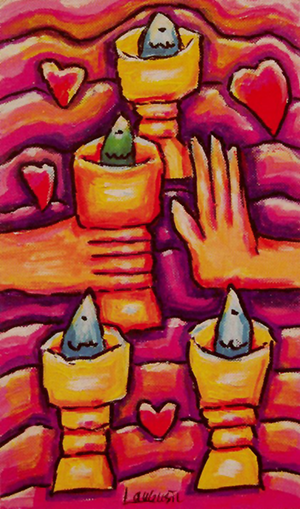 As Mercury opposes Chiron today, you may be asking yourself, “Is that all there is?”

The Four of Cups is a card of apathy. It can represent disillusionment and discontent. It speaks of wondering whether there might be something else out there that would excite or inspire you.

The focus may be on what is lacking in your life, rather than what’s right there before you.

In this version of the card — from Stephen Lange’s colorful Langustl Tarot — all Four Cups are full, each containing its own little fish. Though they’re displayed in a vibrant sea of hearts, even the one that’s “different” in some way is being pushed away.

A lack of motivation and lethargy are also hallmark features of the Four of Cups. There’s also generally a lack of energy, which may mean it’s going to be a lazy day where you don’t feel like doing much of anything.

One of the positive aspects of this card though is that it reveals to you exactly what’s “wrong with this picture” and allows you the opportunity to make it right. And the Mercury / Chiron aspect can do the same.

It can get you thinking about how things could be — in an ideal world or at least with respect to following your dreams — and then what you can do to make those dreams a reality. While you may start out thinking “what’s the point?” you’ll have a clearer idea of what’s worth salvaging and what could use a little more work in the end. .