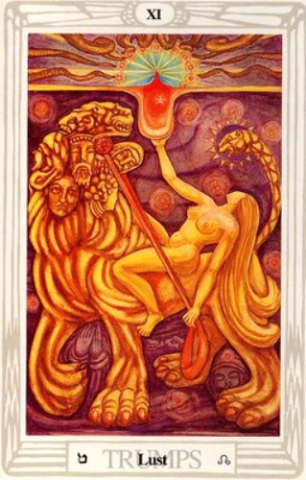 Today is a good day to set aside your fears and inhibitions, and embrace the many blessings that the Universe has to offer you.

The Lust card replaces the “Strength” card in traditional tarot. The main difference is the emphasis on embracing passion and desire rather than attempting to contain it. It is a card of joy, exuberance and passion — ruled by Leo (which is where the Moon is today and tomorrow) in its most unrestrained form.

In this version of the card we see a woman reclining on the back of a beast with seven heads. These are the heads of a poet, an angel, a saint, an adulterous woman, a man of valor, a satyr and a lion-serpent.

She holds the beast’s reins in one hand, and lifts up the Holy Grail in the other. The ten circles in the background are the unordered Sephiroth, which have yet to coalesce into the Tree of Life.

Legend has it that the woman and beast are united in marriage. She is drunk with ecstasy, and he is aflame with passion and desire. The Lust card is associated with Leo, and is said to be the most powerful of the twelve zodiac trumps, as it is ruled by the Sun. It is associated with the Kerub of Fire — the Winged Lion guardian of the Temple.