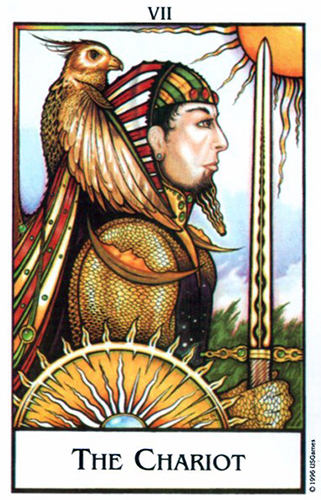 Today’s New Moon is at 0° Aquarius, meaning the Sun and Moon move into the sign at relatively the same time. This is good time to work on harnessing your own power in order to resolve whatever inner conflicts you’ve been dealing with in recent weeks.

As the Sun rules your WILL and the Moon rules your INSTINCTS, bringing them together in the sign associated with progress and evolution can open a positive dialogue between the two.

And while the Sun is prominent in this card, don’t think the lunar influence is absent. Notice the crescent Moon on the charioteer’s arm and the hawk (associated as an animal totem with vision and intuition) on his shoulder.

The Chariot card is also associated astrologically with the sign Cancer, which the Moon rules. In that respect it’s a reminder of how divergent forces in all of our lives — light vs. dark, positive vs. negative, instinct vs. action, etc. — compete with one another for control.

This version — from the gorgeous New Palladini Tarot emphasizes the aspects of will, power and self-control. The figure in the card stares straight ahead, wearing a Sphinx hood and golden chainmail, weilding a mighty sword. The Chariot’s wheels replicate the Sun shining high in the sky, just as the hawk’s gaze replicates the Charioteer’s.

Today’s New Moon in Aquarius invites you to draw upon your inner resources (New Moon) and channel them into external expressions of insight and awareness (Aquarius). It invites you to look at where you fit in in the world and what contributions you can make for the greater good.

The Chariot card says that you can achieve your goals by pulling you own opposing forces together with purpose and focus. You have to take hold of the reins and gather all of your resources together, but your willingness to do so all but guarantees your success in the end.