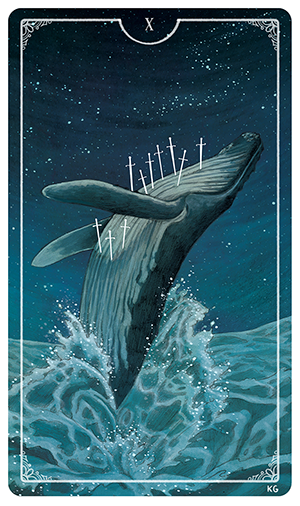 Today’s Sun / Pluto opposition may see you feeling the need to run for cover. This is a stressful aspect that can manifest as feeling beaten down or at your lowest point and wondering whether you have the strength to carry on.

The Ten of Swords is similar and the answer to both is always “yes of course you do.” But it’s going to take some soul searching and maybe a painful admission to yourself that what you’ve been fighting so hard for needs to be put to rest.

The whale in this card has been hit hard by the ten swords that have been driven into its flesh. But they don’t look so imposing against his massive frame. Perhaps this is a good reminder that things aren’t always as bad as they seem and that our problems are only as big as we allow them to be.

Think about what in your own life you’ve been fighting a losing battle against and whether it’s time to surrender.

The Ten of Swords encourages you to not come to terms with the reality of your situation but to consider how much effort and energy have been put into fighting for something that’s just not meant to be.

As hard as it is, you know what you’re up against: there’s no more fretting or worrying about the future (that was left to the Nine of Swords). The Ten of Swords tells you that it’s time to put the past behind you, pick up the pieces and begin the process of moving on.