Today’s Full Moon lunar eclipse first hides and then exposes the deepest, darkest regions of the unconscious via the shadow of the Sun crossing over the Moon.

The Moon card speaks of the need to get in touch with our emotions. it refers to mystery and the unknown, all that is hidden and that lies beneath the surface. This is the realm of the unconscious: that which is churning beneath your awareness and which often translates externally as anxieties, insecurities and fears.

It can manifest as confusion, uncertainty or paranoia — especially when we try to analyze it logically, which is foreign to the realm of the Moon. Just as we can’t fully appreciate the beauty of the Moon in the light of day (consciousness), we struggle to grasp its archetypal meaning through the lens of logic or reason.

In this version of the card — called “Illusion” in the Tarot of the Old Path deck — we see the pale figures of a man and a woman knee-deep in a pool of turbulent waters. The Egyptian-Sky Goddess Nuit stares out blankly at them from a distant horizon, a blanket of stars draped across her kneeling form. The Goddess isn’t happy, you can see a single tear sliding from her eye in the reflection of the pool.

The figures in the card appear to be experiencing a completely different set of emotional reactions under the influence of the darkening Moon. The man buries his face in his hands while the woman raises her arms up in celebration — or is she pleading to the Goddess?

The Moon card can refer to anxiety and confusion, based on an instinct that you can’t make rational sense of. You feel that something is “off” but can’t articulate your reasons because it’s not based on evidence, only intuition. It refers to mysteries and perplexities that are hard to unravel. You may working with insufficient information or you may be making assumptions based on feelings rather than facts. Either way you could run into opposition from others who challenge you to justify your instincts.

You can quiet your fears by reminding yourself that the future has not yet been written and that there’s still time to achieve the outcome you desire. You can work on curtailing some of the Moon’s more harrowing elements (doubt, fear, suspicion and paranoia) and tap into its more uplifting aspects (intuition, perception, sensitivity and discernment) instead.

END_OF_DOCUMENT_TOKEN_TO_BE_REPLACED 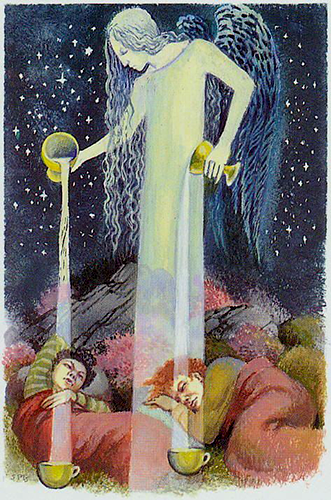 What are you pouring into your dreams and where does it come from?

Is it from you or a divine source? And does it keep you awake at night or allow you to gently slumber and “see” the answers you seek within your dreams?

There is a suggestion in this card that your life is either half full or half empty and depending on how you perceive your situation or how you tackle your problems that you will arrive at your answer in your own good time and in your own good way.

If there was something you could do to facilitate the process of finding an answer to change your lot in life would you do it?

It’s an interesting question considering that one figure in this card is restlessly awake while the other is not and it is the figure who is sleeping who seems to be acquiring the additional help and assistance s/he needs to tackle his dilemma awake with an answer.

The fact that the benefactor, in Angel form, also seems to share this view in that she stands directly above the sleeping figure while her eyes are on the restless soul caught up in the problems that keeps him so awake only goes to prove that there are answers being given to you and it may be that you need to take some “time out” to “hear” the answers.

END_OF_DOCUMENT_TOKEN_TO_BE_REPLACED 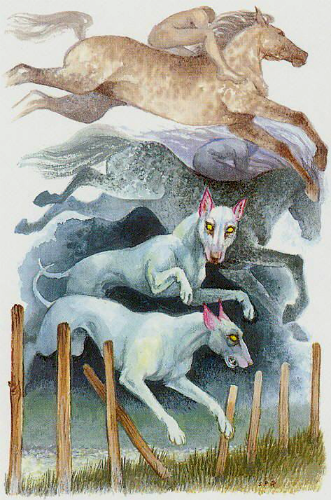 You may find yourself in the midst of a whirlwind of activity today courtesy of the Eight of Wands. This card is all about action, initiative and movement — getting to point B from point A without a lot of dilly-dallying along the way.

The Eight of Wands (Rods in this deck) often also brings news from afar. It could be a letter, a phone call, a friend request or an invitation. It can also refer to someone delivering news (or you delivering news to another).

This version of the card is full of action. As usual with the Eight of Wands there’s a lot going on. We see the legendary Herla’s Hounds — phantom hounds sent to drag the souls of hapless mortals into the underground.

They surge across the countryside, even knocking down one of the 8 posts on their way. The huntsmen soaring above them are also a part of the legend: note the one turning to dust and dissolving into nothingness.

The Eight of Wands refers to swift movement and progress. It’s action, energy and motion. But the imagery in this card must also remind us to be careful and exercise some discipline as there are potential ramifications to pushing too hard or rushing too fast.

As Wands are tied to the Fire element, we automatically associate cards in this suit with expressive, dynamic and creative energy.