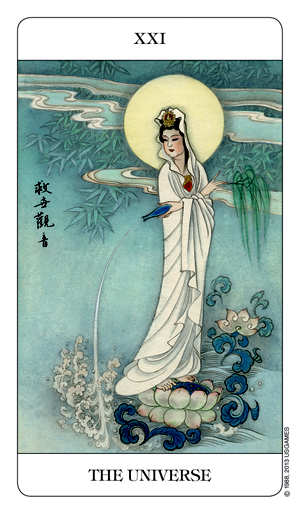 Elegantly you stand today thinking of your next step forward.

The time has come to take a total look at your life and what you have been doing with it up until now and seek out new adventures and avenues in which to express yourself.

There is no need to hurry as the image in this card suggests that you already know what you want and how to get it… and it won’t be by pushing your way aggressively to your goal.

Rather, it is about laying down the foundations… which you already have… testing them out… which is already done.

Otherwise you wouldn’t be standing there in your bare feet trusting your environment and then looking for the “opening” in your life to launch yourself towards something new.

What you choose to do will come to you gently. It is already flowing through you via your thoughts and emotions as can be seen from the stream meandering through the branches.

The green branch held in the right hand suggests you are rewriting and reimagining everything that you wish to make real whilst the blue vial flows from your left hand giving you further incentive to actualise your dreams.

END_OF_DOCUMENT_TOKEN_TO_BE_REPLACED 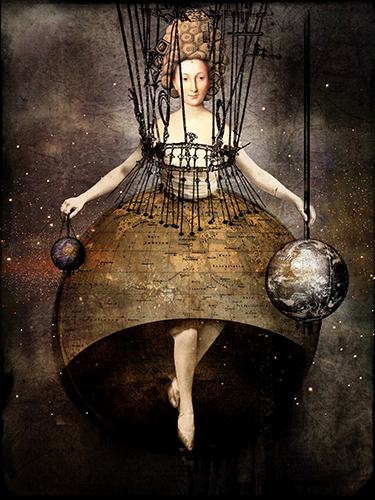 You may be on the verge of closing the door on an important chapter in your life today and preparing to open another.

The World card — called the Universe in some decks — completes the Fool’s journey and as such, speaks of fulfillment, integration and completion.

For example, you could be finishing a course or internship, tying up lose ends on a project that you’re ready to launch, putting a failed relationship behind you and getting back into the dating scene, finishing (and feeling good about) a self-improvement regimen, etc.

The possibilities are limitless, but in all of the above scenarios the World card does not signify an ending as much as it does a new beginning. You’ve put something behind you in order to begin anew, a little higher up on the rungs this time.

In this version of the card — which is not a part of a specific tarot deck but an image that depicts this archetype beautifully — we see a woman suspended in the night sky. Stars twinkle all around her as she stares off into the distance. A globe is imprinted on her skirt and she holds two more in her hands.

END_OF_DOCUMENT_TOKEN_TO_BE_REPLACED 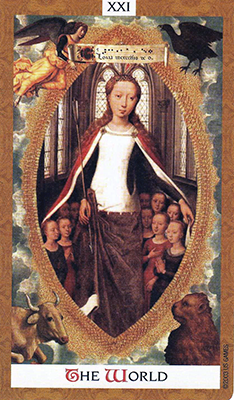 This month you may see the long awaited completion of a project you have been involved in or a part of your life you have been wanting to bring together in the best possible way.

This image on this card comes from German painter Hans Memling famous for many great works of art, including this painting of Saint Urslula of the Holy Virgins.

In this painting, Saint Ursula stands shielding her handmaidens against certain death.

The four corners of the card show the images of the four fixed astrological signs: Aquarius, Scorpio, Taurus and Leo.

This card is about using all of your gifts to reach out and accomplish your goals.

As the last card of the Major Arcana, it symbolizes completion.