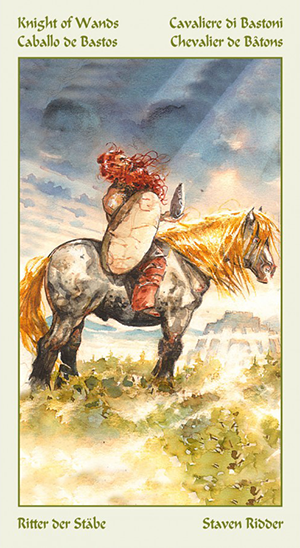 As Mars moves into Leo today, you may feel the urge to road like a lion — or bellow like a beast.

In fact this Knight of Wands is the famed Norse giant Hrungnir and his golden-maned steed Gullfaxi. Hrungnir was said to have has a heart of stone (in addition to his stone shield and weapon, a sharpened whetstone). He thought he was invincible, but was ultimately taken down by his opponent Thor.

Traditionally the Knight of Wands is bold, dynamic and brave. He’s loaded in self-confidence and bravado. And like Hrungnir, he’s often depicted as forceful and aggressive.

If this is someone in your life, you will know him by his larger-than-life personality. You’ll know him by his act-first / think-later approach to life.  And while he may not be off fighting battles, you’ll know that if he were, he’d come out on top.

The Knight of Wands tends to run on adrenalin and has been known to lose interest in projects once they become routine. But overall he’s here to teach you how to challenge yourself to set your goals in motion. If you temper them with a enough discipline and perseverance, you just may see them come to fruition.