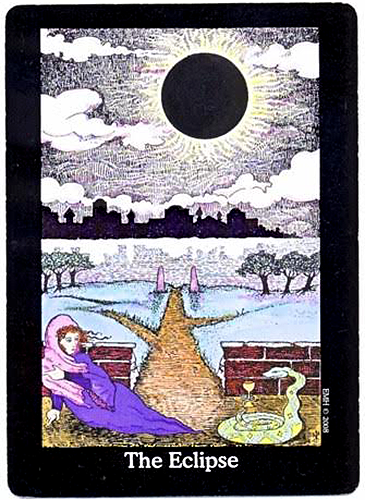 The Eclipse card is the Whispering Tarot’s version of the Moon card, which from an astrological perspective is tied to feelings, emotions, intuition and primal instincts, as well as the unconscious mind. It relates to security issues and needs which can translate to insecurity, uncertainty, fears and apprehensions. And these are all emphasized in the Tarot’s version of the Moon.

It can manifest as confusion, uncertainty or paranoia, especially when we try to analyze it logically, which is foreign to the Moon. Just as we can’t fully appreciate the beauty of the Moon in the light of day (consciousness), we struggle to grasp its archetypal meaning through the lens of reason.

The Eclipse card takes this a step further by bringing in some of the symbology associated with the dark side of the Moon. It can refer to anxiety and confusion, based on instincts that you can’t make rational sense of.

END_OF_DOCUMENT_TOKEN_TO_BE_REPLACED 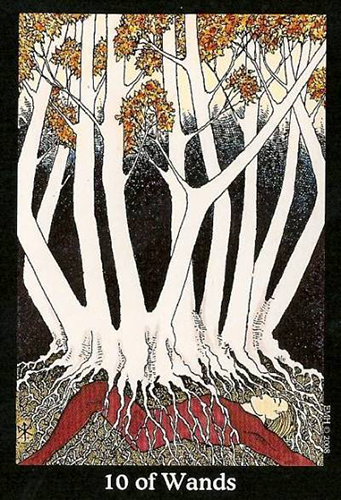 Has it seemed like it’s been all work and no play for you in recent days? The Ten of Wands — this version from the gorgeous Whispering Tarot — can feel like you’re carrying the weight of the world on your shoulders, or are so consumed with work that you have no time left for anything else.

You might experience this first hand on the job or in a stressful relationship or even in your own head. If you’ve been giving — of your time, energy, money, affection — until you find you have nothing left to give, that is the essence of the Ten of Wands.

You may be questioning whether something is worth putting more effort and energy into — such as a job, a relationship, or a business venture that’s not paying off — or whether it’s time to throw in the towel.

Mars and  Chiron are in a hard aspect (inconjunct) today. This is a tricky configuration because it creates tension between the planet related to action and self-direction (Mars) and the planet related to self sacrifice. It can translate as illogical doubts and fears, which you don’t want to let hold you back.

END_OF_DOCUMENT_TOKEN_TO_BE_REPLACED 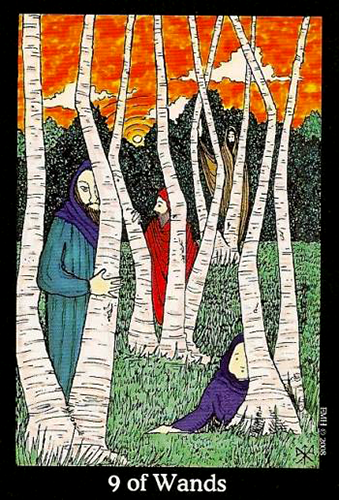 If you’ve been thinking about where you’re heading — in your relationships, with your career, or in your life in general — now is the time to reflect on how far you’ve come and to make preparations for whatever obstacles may still lie ahead.

You may be hesitant about what the future holds, especially if things aren’t laid out before you in ways that are crystal clear. Like the figures in this card — from Elizabeth Hazel’s gorgeous Whispering Tarot — you may need to exercise caution when scoping out your horizons.

The Nine Wands in this card are actually trees that offer refuge and protection for these weary travelers. They offer a safe haven — a place to rest — for them to get their bearings and gather their strength.

Mercury and Neptune are in hard (sesquisquare) aspect today. This is a tricky configuration because it creates tension between the planet related to thoughts and ideas (Mercury) and the planet related to dreams and aspirations (Neptune). It can manifest as illogical doubts and fears, which you don’t want to let hold you back.

The Nine of Wands asserts that while things may not be easy — and while there are bound to be more challenges ahead — it’s hardly the time to throw in the towel. You need only think about how far you’ve come (and how much you’ve already accomplished) to find the motivation to push ahead.