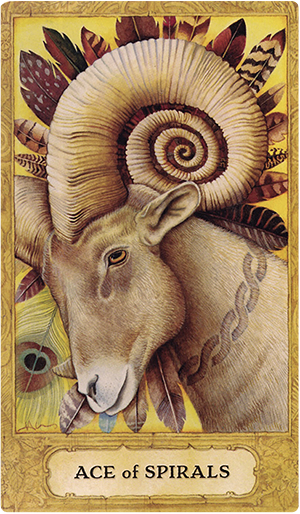 On the heels of yesterday’s total Solar Eclipse of the Sun at 29° Pisces — and the last day of winter for those in the Northern Hemisphere — the Sun has now fully stepped into Aries.

What better card to honor this transition than the Ace of Spirals from the gorgeous Chrysalis Tarot? The card features the head of a Ram (symbol for Aries) with prominent spiraled horns.

Feathers from different species of birds encircle his head like a ceremonial headdress — I counted 22 in all, perhaps this is a symbolic reference to the 22 cards in the major arcana.

The Peacock feather — known as the “eyes of the stars” — is said to represent an awakening, awareness, insight and luck, all fine Aries keywords.

The Ace of Spirals is this deck’s version of the Ace of Wands. Its keyword is “Energy.” It refers to the Arian qualities of action, impulse, fearlessness and drive. Like all Aces, the Ace of Spirals is a pure, raw, untamed energy. It’s an essence that can be formed or shaped or planted like a seed.

This feels like a kinder, gentler Ram; there’s a soulfulness in his eyes and a certain dignity in his stance. He’s got an “all-knowing” quality about him, made even more distinct by the timelessness of the celtic knot that encircles his neck.

The Ace of Spirals — as well as the Sun moving into Aries — is all about inspiration and potential. It invites you to ask yourself what you really really want that you haven’t (up to now) put your whole heart and soul into? And what are the chances of making it a reality unless you do?

The Moon is in Aries today too — joining Mars, Uranus and the South Node — so there’s no dearth of this fiery, dynamic energy. It’s time to offer your intentions up to the Universe with every reason to expect you’ll be rewarded for doing so. It”s time to push all negativity aside and replace it with optimism and inspiration. If you’re truly serious about manifesting your desires, there is no time like the present to do it.