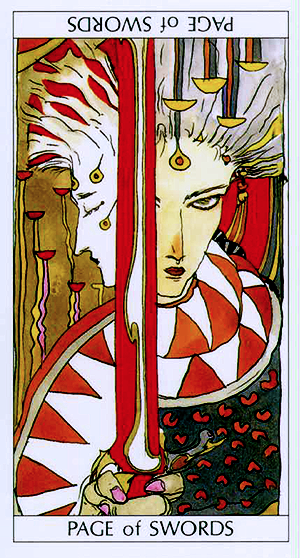 Pay attention to messages you receive today as they may be veiled or cloaked in double meanings.

The Page of Swords is a messenger card and is known for ferreting out the truth. But this “two-faced” version implies that things are not always as they seem and may come about through deception or duplicity.

You may uncover a deception or meet with someone whose motives prove to be disingenuous. Or you may have the be the bearer of uncomfortable news yourself, in which case you find yourself needing to deliver it carefully and diplomatically.

The Page of Swords — this version from Yoshitaka Amano’s Amano Tarot — is all about communications, ideas, information and news. He (or she) is generally very curious, a good judge of character, quick to size up others and able to see through ulterior motives and agendas.

In this respect it’s very difficult to hide anything from the Page of Swords. Yet this Page appears to be good at hiding his own true motives: presenting one face to the outer world while hiding his true identity in the background.

Communications are going to be important today, and as Mars conjuncts the South Node, you want to be particularly careful at how you communicate your ideas to others. The Mars/ South Node aspect is not known for tact or diplomacy.

The potential for being at odds with others or getting into a disagreement with someone is high.

But be careful too that you don’t make assumptions about someone’s motives that turn out to be colored by your own paranoia. The downside of this card is the potential for distorting information or reading into it something that is simply not there.

The challenge for you today is to figure out a way to look at the whole picture without accepting things at face value. While here’s likely to be more than meets the eye with respect to any communications, your goal should be to work on getting at the truth and disregarding anything that detracts you from that goal.

END_OF_DOCUMENT_TOKEN_TO_BE_REPLACED 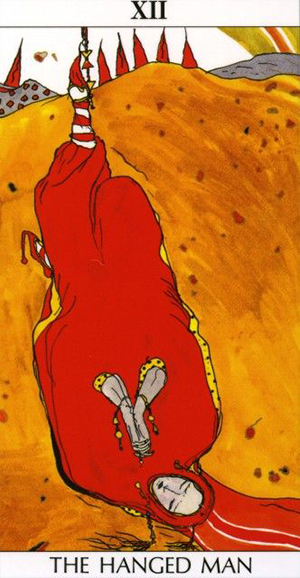 Today with Mars squaring Saturn, you may feel like the Universe is forcing you to put certain aspects on your life on hold.

Plans you’ve made may he held up or delayed, or you may feel the need to take a step back and regroup.

The Hanged man refers to things slowing down or even coming to a dead halt. It could be due to circumstances beyond your control, or it could be a decision you make when you realize the path you’re on is leading you in a direction you don’t want to go.

You could be frustrated over something that’s taken too long to manifest, or have the sense that nothing is happening despite your best efforts. Road blocks are put in your path — often for your own good.

With this aspect in play today you may feel like you’re being blocked at every turn.The Mars / Saturn aspect can brings obstacles and obstructions and it can also force you to back down when what you really want to do is push forward.

Your bet under these circumstances is to make like the figure in this card. Surrender to a higher power, or at the very least give up your resistance — for now.

You may have been running at a break-neck pace, never stopping to look at what you’ve accomplished. Or you may have found yourself losing steam over a project that just hasn’t panned out. Either way, it may be time to put things on hold — at least long enough to evaluate your commitment.

The Hanged Man often refers to delays and sacrifices. When it does, you can bet they’re necessary. Trust that there’s a reason — even if it’s not readily apparent — and that it will reveal itself to you in time.