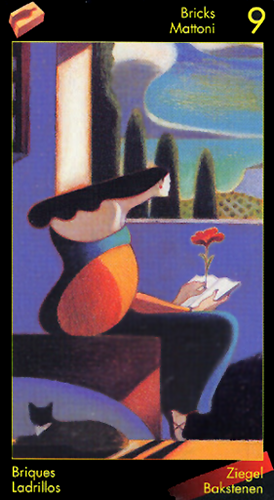 Today is a good day for quiet reflection and contemplation.

You may be seeking out a peaceful refuge as a means of getting away from the distractions that can prevent you from figuring out what you want out of life.

The Nine of Bricks is the Dante Tarot’s version of traditional tarot’s Nine of Pentacles, which usually refers to not only having what you want but being satisfied with where you are in having attained it.

There is certainly some that same energy here. The woman in this card doesn’t look like she’s lacking in any way. She has a lovely home with a gorgeous panoramic view and enough time on her hands to be able to spend a leisurely afternoon alone with her book and her familiar.

The woman is this card is said to be “Lady Stone,” for whom Dante wrote numerous poems in his youth. She represents a pensive sort of longing and an unrequited love. There’s an ivory tower / untouchable aura surrounding her in this card that renders this correlation plausible.

Venus and Jupiter inconjunct Chiron today as they inch closer to their conjunction. The inconjunct aspect can indicate a sacrifice that must be made in order to attain your ideals. Letting go of something you thought you needed — or discovering that your needs no longer correspond with your desires — are both possibilities.

The Nine of Bricks encourages you to look back over all that you’ve attained and decide whether it’s brought you contentment or complacency. You also want to look at whether the plans you’ve made for your future are still in line with your current worldview. If you’ve come to a point where you realize that all that you wanted has still not brought you happiness, it may be time to make a change.

END_OF_DOCUMENT_TOKEN_TO_BE_REPLACED

Today you may find yourself up against an opponent, or dealing with someone whose fury and aggression feels like an outright attack.

This could be a relationship partner, a co-worker or even a complete stranger who is so consumed with rage that he or she lashes out with little or no provocation.

Fortunately for you the tools for dealing with this kind of bully are right there at your disposal. With Mercury and Mars in sextile today, you should be clear-headed and quick-thinking enough to steer your way clear of any danger.

The Six of Flames — from the Dante Tarot — is this deck’s version of the Six of Swords. But this is not your typical dime-store Six of Swords. In fact most of the symbolism for cards in this deck — intuitive or otherwise — veers dramatically from standard Rider-Waite interpretations.

This version is far more aggressive, and far more threatening, although — as with traditional interpretations — some things are cleared up and some are resolved.

The central figure in this card is a three-headed hellhound, the famed mythical Cerberus or guard dog of the Underworld. He looms over the cowering sinners in the foreground, keeping them at bay. Notice that the sky behind the clouds at the top of the card is also black.

In the story-line from the Divine Comedy that this card references, Dante is able to get answers to some of the questions he can’t get in the living world. They’re not all answers he’s happy to hear. But they do provide him with insight and clarity.

There’s also an act of ingenuity (Mercury sextile Mars) wherein Dante and his companion slip past the beast by distracting it with mud.

If you find yourself at odds with someone today ask yourself whether you’re the aggressor or the victim and what you can do to balance that energy out. The Mars / Mercury aspect says you have to use your head (Mercury) but it also serves as a reminder that you need to stand up and face your challengers (Mars) rather than allowing them to back you down.

END_OF_DOCUMENT_TOKEN_TO_BE_REPLACED 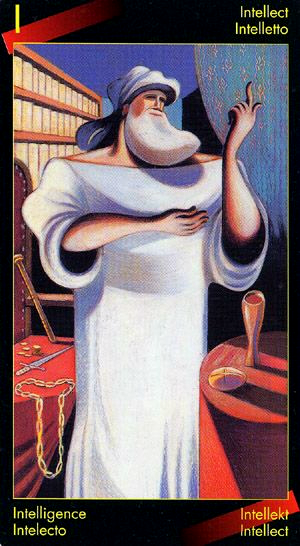 
Today’s Mercury / Mars trine should see you tapping into your own creative potential for inspiration.

The Magician card — called Intellect in this deck — refers to the divine spark that is within all of us, and encourages us to use it to accomplish our goals.

The central figure in this card is a wise old Sage, cloaked in pure white robes and sporting a long white beard, He may be “old” but he’s not weak or feeble. He stands with one hand over his heart and one pointing up toward the heavens.

The tables on either side of him contain everything he needs to sustain himself and to achieve his goals. There is a wand, a cup, a sword, and a scattering of pentacles. In addition to the tools associated with traditional tarot decks, this version includes a gold chain and a roll with a cross etched into it. These tools are related to Dante’s Convivio that this card is based on. The chain represents wealth and treasure and the roll is referred to as “bread of the angels.”

The Mars / Mercury combination enhances creativity and stimulates intellectual pathways. It also provides clarity and perspective. As these two planets are in air signs, the potential for gaining some spiritual altitude — in the sense of “rising above” and being able to look at things more objectively, is also indicated.

END_OF_DOCUMENT_TOKEN_TO_BE_REPLACED 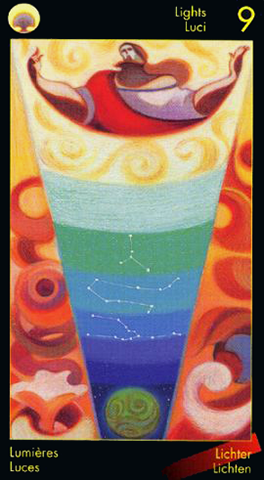 This can be a rewarding and fulfilling day for you. The Nine of Lights provides you with opportunities to count your blessings, thank your lucky stars and be witness to miracles taking place all around you.

This card (referred to as the Nine of Cups in most decks) refers to abundance, prosperity, happiness and fulfillment. it’s a card of gratitude and wonder; it speaks of being present in the moment and willing to receive all that the Universe has to offer.

In this version of the card we see Dante (from the Divine Comedy’s Paradiso volume) ascending into the Eighth Heaven — the Sphere of Fixed Stars. We see him rising above the earth, through the clouds and sky, past the planets and constellations, and on into Heaven. His lifts up his arms — in wonder and gratitude — basking in the glory that surrounds him.

Here’s a simplified summary of this section, from the Schmoop.com website:

“Beatrice and Dante ascend to the Eighth Heaven, sphere of the Fixed Stars. Dante gazes down on Earth and realizes how small and petty it is. They witness the coronation and re-ascension of Mary and Christ into the Empyrean. St. Peter examines Dante on faith. Dante conveys his hope of returning to Florence one day to be crowned as a poet. St. James examines Dante on hope. Dante goes blind. St. John examines Dante on charity. Adam answers Dante’s four questions. St. Peter denounces corrupt popes.”