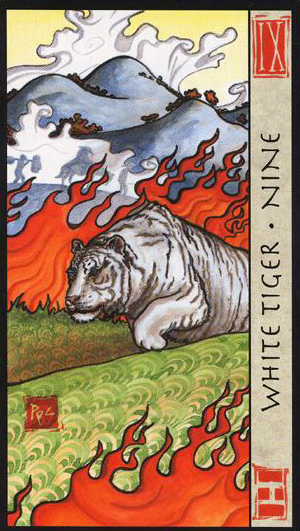 Life may be catching up with you today as the White Tiger Nine (Nine of Swords) sweeps in with the promise of… well perhaps a change in your luck and not necessarily for the better.

The Nine of swords is a card of struggle and from the image on this card you can see that the path before you is not a straightforward one, albeit that you are not in the flames, you are nonetheless walking a very fine line between things going ok and things taking a turn for the worst.

Keep this in mind if you have anything big to do today and don’t try to push for more than you naturally believe you deserve and even then you may wish to push for a bit less than that.

A white tiger is a rare creature and if you are feeling as if the world is against you today then bear in mind that you are perhaps a little out of your depth when it comes to the direction you are seeking to take and that the path will not be easy.

If you look in the background of this card there is a reminiscent scene from Gone With the Wind in which people are running from something and a horse is rearing its front legs as if in fright.

These figures are going in the opposite direction to the tiger which gives an indication also that around you people may be fighting their own battles and struggles and perhaps not coming up trumps with them.

END_OF_DOCUMENT_TOKEN_TO_BE_REPLACED 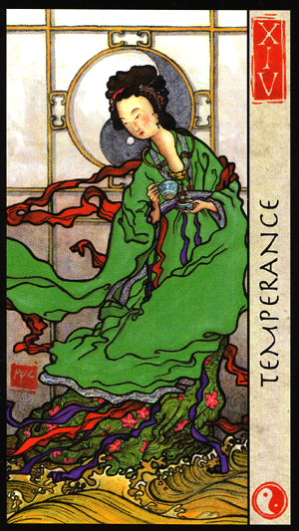 Here’s something a little different today.  As you read the poem look at the image of the card and allow it to soak into you:

You need balance and calmness to reach your goals
And if all else fails look in the teacup as your fate unfolds
For if nothing else, this will give you peace of mind
And that which you are looking for I hope you find.

END_OF_DOCUMENT_TOKEN_TO_BE_REPLACED 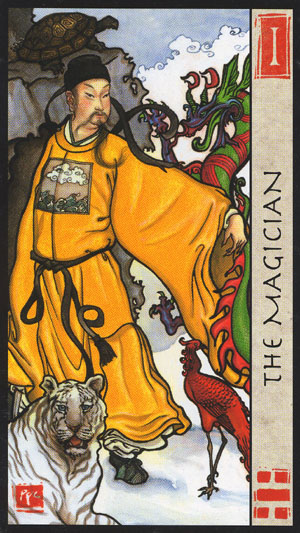 Today may see you tapping into your own creative energy and harnessing “powers” that you didn’t even know you had. The Magician card refers to making something happen through your own skill, cunning and initiative.

Think about areas in your own life where you’ve felt you didn’t have what it takes to accomplish your goals.

It could be a career move or a relationship decision or even a personal change such as dieting, quitting smoking, tackling self-defeating thought processes, etc.

The Magician cards tells you that you not only do have the powers to make these things happen, but you’ve had them all along.

This has to be one of then most beautiful and colorful renditions of this card I’ve seen. The Magician is high up in the mountains amidst the clouds and open air.

The four cardinal points of the compass — the Black Tortoise, Red Phoenix, White Tiger and Green Dragon — are all here.

The Magician himself is poised gracefully in their midst. This is a common theme among the different versions: having all of the necessary resources within reach.