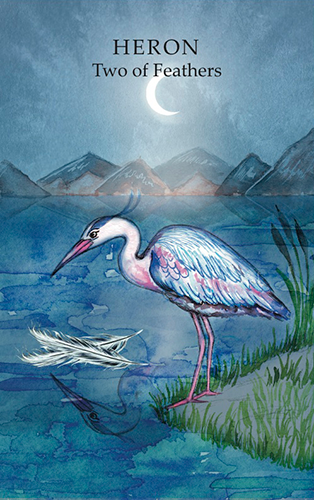 Today you may be feeling torn between two competing interests or desires and at a loss as to which one one you want to follow.

You may be thinking about where you fit in in the world and the contributions you’ve made. Or like the Heron in this card, you may be reflecting on what you want for yourself.

As difficult as it is to balance these dual desires, you may find yourself at an impasse. It’s hard to feed one set of urges without feeling like you’re neglecting the other.

You may need to take the time to reflect, much like the Heron in this card. This is the Animal Wisdom Tarot’s version of the Two of Swords — called the Two of Feathers in this deck.

Here we see him gazing down at his reflection in a tranquil pool. A crescent moon shines in the night sky, illuminating the pair of feathers that are crisscrossed on the water’s surface.

As the Two of Swords often refers to inaction and immobility, you might take a page from the Heron’s book and use that inertia to reflect on your options before you make a move.

While you may normally be prone to “act first and think later,” today it’s probably going to be best for you to hold back and weigh your options instead. In doing so you may just be able to find a way to satisfy both sets of urges.

END_OF_DOCUMENT_TOKEN_TO_BE_REPLACED 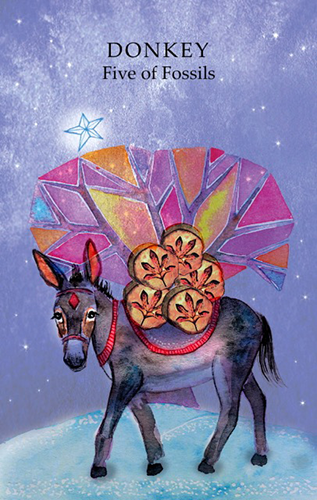 Today’s card — the Donkey or Five of Fossils — is the Five of Pentacles in traditional tarot. It can indicate a need to rethink what you value, especially when it comes to your own sense of worth or self-esteem.

It can mark a period of financial adversity, such as seeing your earnings held up or seeing your resources dwindling as a result of unexpected expenses.

As Pentacles are linked to “values,” we most often think of money. But they also relate to self-worth: it’s hard to feel good about yourself when you’re struggling — financially or otherwise.

In this version of the card from the beautiful Animal Wisdom Tarot — the Donkey is seen carrying quite a heavy load. He trudges through the snow — alone — with all of his worldly possessions on his back. But look at the stars in the night sky and especially the one bright star that shines directly above him.

Notice how it shines through the fossils on his back and creates a prism of colors that glow all around him. He may be so caught up in the burden that he carries that he doesn’t even see it — which is one of the most important lessons associated with the Five of Pentacles.

You too may feel vulnerable and exposed under your current circumstances. You may be afraid to ask for help, especially if you’re sensitive to being watched or judged. But the message here is to work on overcoming those fears and on recapturing that inner beauty that glows all around you, even if you’re the last one to see it.

END_OF_DOCUMENT_TOKEN_TO_BE_REPLACED 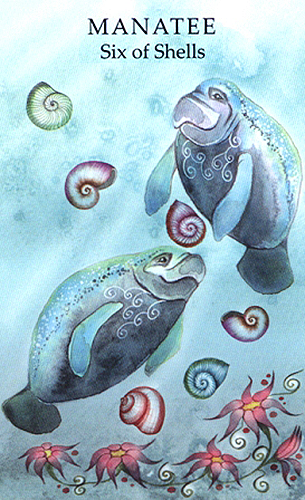 Has it been all work and no play for you in recent days? Or have there been too many responsibilities weighing on your shoulders and not enough letting your hair down and just having fun?

The Six of Shells —  Animal Wisdom Tarot’s version of the Six of Cups — says it’s time to do just that. The Manatees in this card aren’t thinking about all the work piling up at the office or all the emails they have respond to at home.

No they’re fully engaged in a game of catch, while the rest of the world floats by around them. This is the essence of the Six of Shells. Having fun, being playful and immersing yourself in the present rather than fretting about the past.

There’s a childlike innocence and wonder associated with this card. In fact children may figure prominently for you today and the thoughts of your own childhood may be triggered by their presence. If so consider it a call to observe their ability to live in the moment and follow in kind.

The Manatee as an animal totem speaks of companionship, trust and gentle play. It encourages you to take turns, share, and accept those around you for who and what they are.

The Six of Shells is all about finding pleasure in the simpler things in life. It says it’s time to kick your shoes off and have fun rather than getting bogged down with responsibilities. All those will be exactly where you left them when you come back to them later on, so for now put them all aside and try to recapture the spirit of those carefree days gone by.