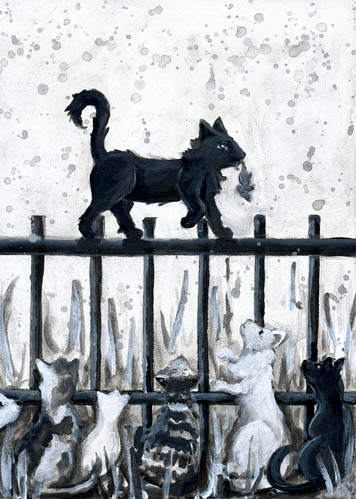 Today’s Mars / Jupiter conjunction makes it a good day to strut your stuff and show the rest of the world what you’re made of.

It’s a day for being recognized and validated for a job well done. Whether it’s on the job or in your personal relationships, chances are good you’ve accomplished something you can be proud of.

You may have been putting a lot of effort into your work and not even realizing that others have taken notice. Or you could be unexpectedly pulled aside by a loved one, just to tell you how much you’re valued.

The Six of Wands is a card of appreciation and admiration. You “win” something and have earned the right to be satisfied with the spoils of your victory. This isn’t about ego or conceit and it’s never at someone else’s expense. There’s a strong sense of being supported and lifted up by others who rejoice right along with you.

Like the cat with his mouse in this version of the card — from the Phantomwise Tarot — you should be feeling proud of what you’ve accomplished and not afraid to bask a bit in your glory.

If you’re in line for a promotion, an award or some other form of external validation, be ready to embrace it as confirmation that you’ve earned it and deserve it. But don’t forget to thank the little people — those who have lifted you up and helped you along the way.

END_OF_DOCUMENT_TOKEN_TO_BE_REPLACED 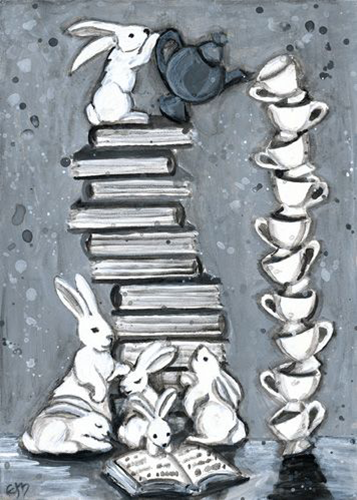 Today is a day for counting your blessings. It’s a day for expressing gratitude for the life you’ve created and for the loved ones and family members who’ve been such an important part of it.

The Ten of Cups — this version from Erin Morgenstern’s Phantomwise Tarot — is all about friendships and family, camaraderie and hospitality. It’s about joining together with like-minded people to create a legacy that will live on long after you’re gone.

You may be arriving at a place in your life where you can look back over the connections you’ve established and the commitments you’ve made. Relationships that have held up over the years and that promise to withstand the test of time.

The rabbits in this version of the card make up one big happy family. They’re doing what rabbits do best — multiplying — as are the books they’ve stacked up beside them and the teacups they’re filling from top to bottom. This card emphasizes the qualities of support, companionships and camaradarie that are such important features of this card.

The Ten of Cups refers to achieving something that is worth acknowledging and celebrating, as seen here in the imagery of this card. It’s about fulfillment and security; a solid foundation of abundance and prosperity, and the sense that you have built something you can take pride in.

Take time today to let those nearest and dearest to you know how important they are. While the Ten of Cups is also said to indicate the culmination of something, that doesn’t mean you’ve come to the end of the road. This card is all about embracing all you’ve established through your connections and interactions with those who matter most — with your family, friends and loved ones.

END_OF_DOCUMENT_TOKEN_TO_BE_REPLACED 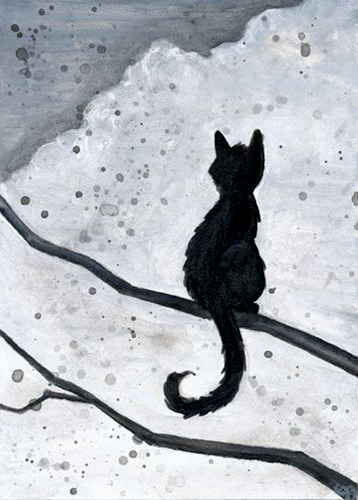 Be on the lookout today for opportunities that are available to you which might not be so readily apparent from your current vantage point.

The Two of Wands speaks of having put an initial plan into action (with the Ace of Wands) and seeing it starting to gather momentum. It means that something has started to happen — something big enough to assure you that you’re on the right track, but not well-thought out enough yet to ensure that it’s a go.

Mars is in Aries now and moving into trine with Jupiter, giving you both the optimism and the energy to see your goals to fruition. But you may need to get some altitude — like the cat perched on the highest limb of this tree — in order to get the clearest overview.

We can see that the cat is both patient and alert — two of the most important (and necessary) features of the Two of Wands, which are both captured here in the simple imagery of this card. It’s the ability to balance these two qualities that makes getting to the finish line possible.

Notice that the lower branch is forked, indicating earlier missteps or changes in plans. The cat has wisely lept up to a higher perch where he can get a better view of the road ahead of him.

The Two of Wands encourages you to expand your horizons and reach for broader vistas. It speaks of taking a look at your long-term goals and acting on them with courage and conviction. You’re already seeing how some moves are paying off, and are now in a position to take things to the next level.

If you’ve been hesitating due to fear or uncertainty, now is the time to put those worries aside. The Mars / Jupiter trine says that all you aspire to is now within your grasp; you only need to muster up the confidence to go after it.

END_OF_DOCUMENT_TOKEN_TO_BE_REPLACED 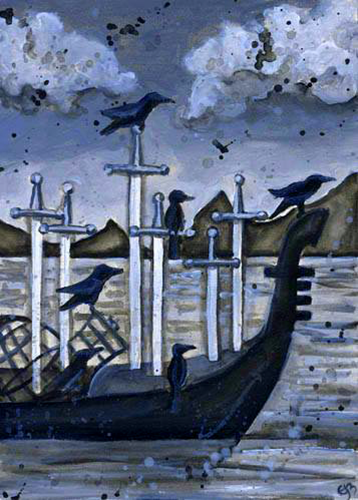 You may be thinking of journeys today and not necessarily the type of journey that involves travelling. The image on this card suggests a journey within your own mind where you delve deeply into what is working for you and what is not.

The birds within the boat interlacing with the swords suggest that your thoughts may take you on a journey that you wish to share with others and it will carry far and wide.

Although the water and landscape within this image looks desolate and perhaps a bit forlorn this is not necessarily the case. Sure, there are hiccups to overcome in what you may find when you start delving deeper into your mind and find what you may not wish to find but at the same time there are a few gems in there also that may take you further than you thought.

Look at how the birds have taken to the air. The four hills in the background which suggests life’s up’s and down’s and the latticework within the boat that the birds are resting on as if to say… the path behind you is the bedrock for the path in front of you.

What I was particularly drawn to in this card was the water. It reflects the sky and whilst the sky is overcast you have to wonder what the surface of the water would reflect if it were a bright sunny day.

END_OF_DOCUMENT_TOKEN_TO_BE_REPLACED 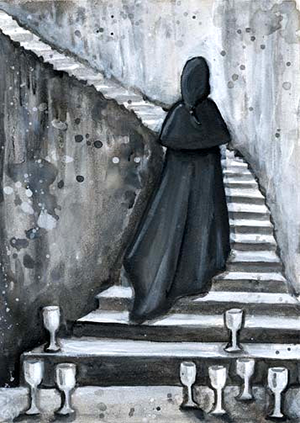 Today may see you making a difficult decision to let go of a situation that has not been healthy or rewarding for you.

The Eight of Cups refers to the realization that you’ve put more into something — invested more of your time, energy, heart, etc. — than you’ve gotten back, and now it’s time to face that reality and walk away.

In this version of the card a young woman ascends a staircase that leads to who knows where. She climbs the stairs carefully and determinedly. Behind her — at the base of the stairs — are eight upright chalices, all presumably still full.

This is what makes the decision to walk away so agonizing: it’s clear that there’s still something there and that leaving it behind means letting go of the potential for it to grow into something more.

Usually the realization that it’s time to walk away comes after you’ve given of yourself to the point of exhaustion. You may have come to this juncture in a relationship, or have gone as far as you can in your career, or have worked on a project that held promise in the beginning but has since become a drain.

END_OF_DOCUMENT_TOKEN_TO_BE_REPLACED 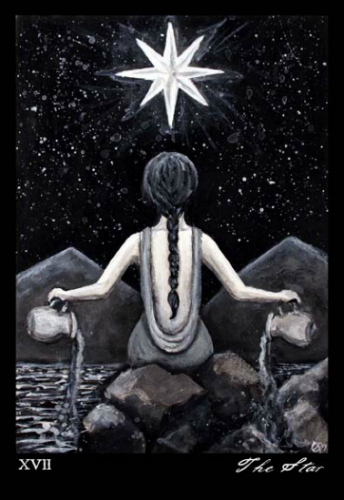 The Star card indicates a renewed sense of hope and faith in the Universe, usually after a difficult period. As the Star card sequentially follows the Tower in traditional tarot, there are elements of “picking up the pieces” present in this card.

You may be feeling more inspired after a period of disappointment or disillusionment. You may be more aware of your connection to other people and to the world around you. And you may be more conscious of how all of your actions reverberate into cause and effect principles that boomerang right back to you.

The Star is all about Universal harmony and synchronicity. It’s about being one with the Universe and feeling connected to every single other living thing. We see it in the almost perfect symmetry that’s present in this version of the card: from the 8-pointed star in the sky, to the mountains on either side of it, to the vessels in the woman’s hands from which she pours water into the sea.

There are as many possibilities before you as there are stars in the night sky. If you play your cards right you could be wishing on one tonight and thanking your lucky ones tomorrow!