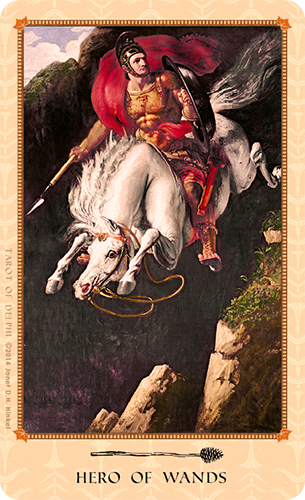 Jupiter turns direct in Leo today and starts moving forward again, after four long months in retrograde motion. This change in direction should have you feeling more confident and enthusiastic about the direction your life is heading.

The Hero of Wands — this deck’s version of the King of Wands — represents the quintessential “Leo” energy. He’s bold, assertive, dynamic and confident.

He’s passionate and driven, also like the King of Wands. He’s powerful and authoritative. There’s a boldness and a bravery present in this version that lends him a “larger than life” persona and renders him unstoppable.

The Hero in this version of the card is none other than Marcus Curtius, the legendary soldier who sacrificed his life for the inhabitants of his beloved Rome.

When a giant pit developed in the Roman Forum, it was ordained that only the City’s most prized possessions could satisfy and fill it.

Marcus Curtius, knowing instinctively that the Romans prized courage and bravery above all else, mounted his stallion and leapt into the chasm, which closed immediately. The devotion and chivalry that are present in this card are qualities that we might all strive to possess.

As Jupiter continues its journey through Leo, remember that you may be called upon to act with the same nobility and honor as the Hero of Wands possesses. The challenge will be finding a way to minimize the severity of any personal sacrifices you’ have to make, while still conducting yourself with integrity and grace.

END_OF_DOCUMENT_TOKEN_TO_BE_REPLACED 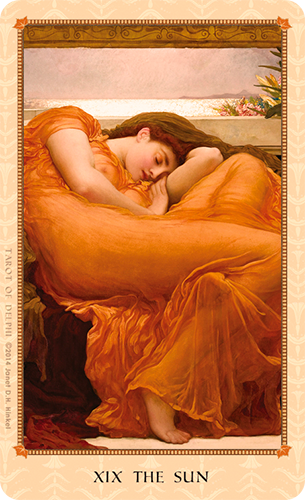 This month should see you feeling a sense of satisfaction and contentment over recent accomplishments.

The Sun card is traditionally associated with vitality, warmth and a sense of feeling particularly “alive.” But in this version the focus is just as much on taking care of yourself and manifesting that vitality through soaking in the Sun’s rays and recharging your batteries.

The Sun, Mercury and Venus all move through your 6th house this month — the area associated with work and with self-improvement, which includes your physical and mental well-being. Rest and relaxation is just as essential to that process as are work and productivity.

The “Sun” in this card appears to be setting. It casts its rays onto the ocean in the background, shining across the surface like molten gold.

The image of the woman sleeping comfortably without a worry in the world perfectly captures the essence of the Sun. There’s a sense of effortlessness that’s associated with this card, even as the world keeps on turning around you.

Your ruler (Mars) moves into Sag this month (on the 13th) and into your 9th house — the area associated with personal growth and expansion. After that point there will be plenty of time to spread your wings and fly.