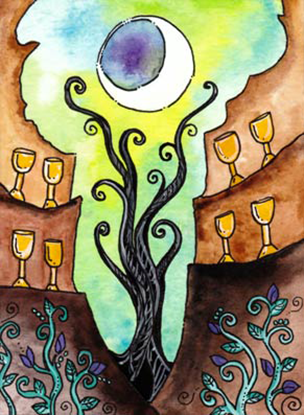 Today may see you taking steps toward leaving behind something that no longer sustains you.

The Eight of Cups refers to getting in touch with your values, which can be a painful process. It involves forcing yourself to face certain realities and walk away from something (or someone) that doesn’t live up to them.

On the upside it means taking the high road and making a transition. But that doesn’t mean it’s going to be easy. The Eight of Cups requires you to let go of something — a dream, a relationship, a set of goals, etc. — in order to move to that higher ground.

This is a card of transition, but unlike most, this one comes from conscious choice. It’s not a matter of the Universe throwing a curve-ball at you: it’s a decision arrived at though the realization that what once fulfilled you no longer does.

You may feel alone or abandoned during this time — rejected by a loved one or peers. Yet it’s your own discontent that prompts you to “walk away,” rather than keeping up the pretense that those who let you down were ever truly on your side.

This doesn’t refer to loss so much as it does to seeing things more clearly and then using that new-found clarity to head toward higher ground. Like the brightly shining crescent moon in this card, it’s about new beginnings rather than endings. You can see this card as an invitation to strike out on your own, follow your own path and pave your own way.

END_OF_DOCUMENT_TOKEN_TO_BE_REPLACED 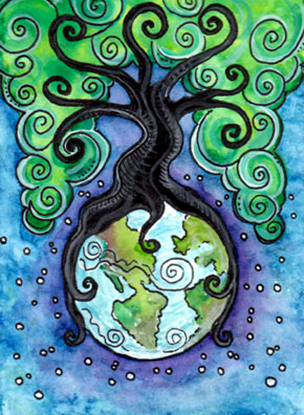 While some people are busy looking at the glass as half-empty, you’re seeing it as more than full. You’re focusing on how far you’ve come and how much you’ve achieved over the last several months

If you sit back and take stock of what has actually changed for you will get the sense that while some things change others stay the same and this is neither good nor bad.

Everything is as it should be for you to enter the next phase of your plans.

The journey that began with the Fool ends here with the “World,” and a sense of accomplishment, fulfillment and completion.

And just like the Fool, you’ve come full-circle, from instinct to essence to progress to development, as you end one cycle and embark on a new one.

This card represents endings and new beginnings.You must tie up loose ends and close the door on one chapter in your life — even if that leaves you with feelings of longing or regret.

You can see the tree in this card sitting on top of the world, encircling and embracing it. It grows upwards towards the heavens and the world just keeps on turning — just as we must grow and change with the natural rhythms of life.

END_OF_DOCUMENT_TOKEN_TO_BE_REPLACED 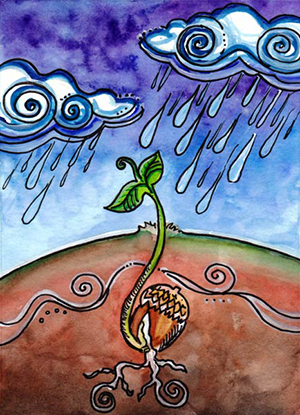 One little thought can go a long way.

If you are trying to decide something today or feel you are being judged by others take note that what you actually think about yourself holds a lot more weight than what others do.

When it comes to your life you are the only person you have to answer to so don’t go running around in circles trying to please everyone else as you may end up pleasing no one… least of all yourself.

Look at the root system in the lower image of the card. There is a striking resemblance to a figure running around with new growth sprouting from their head.

In front of them is another image but that image has fallen over and not taken root itself even if it still feeds into the system of growth.

Such is it also with your life. You may be called upon to make decisions today in which way you want to go with a particular matter you have been pondering over for a while. Keep in mind that you may not be able to lay down the foundations to change everything all at once.

END_OF_DOCUMENT_TOKEN_TO_BE_REPLACED 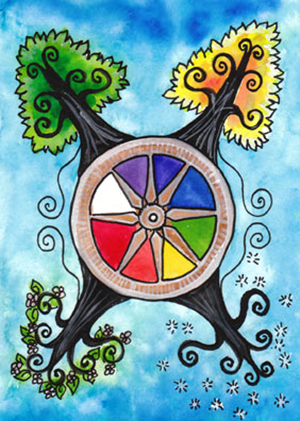 Be conscious of the decisions you make today as well as the words you use to communicate your needs. With Mercury conjuncting the North Node, what you put out there can have far reaching consequences, particularly in the way you express yourself to others.

The North Node, like the Wheel of Fortune, refers to karma, fate and destiny. Reaping and sewing. The Law of Attraction. The winds of change.

It’s a reminder that all we send out comes back to us in some form or another. It may not be today; it may be months or years or even lifetimes away.

Venus and Chiron are also in aspect today, indicating a need to let go of painful associations. This can be an important step toward clearing up some of the negativity in your life, especially if you’re holding onto something (or someone) that no longer serves you.

The Wheel of Fortune is all about life’s natural cycles and rhythms. It can bring exciting new opportunities or challenges you have to face. There are as many ups and downs as there are highs and lows. One day you’re “on top of the world” and the next you’re clawing your way back up from the bottom.

END_OF_DOCUMENT_TOKEN_TO_BE_REPLACED 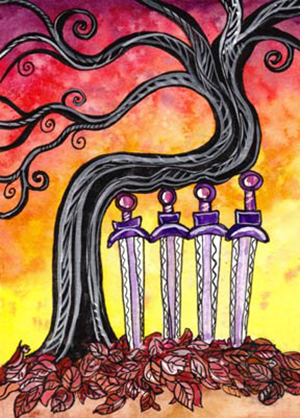 WIth Mercury and Neptune in quincunx today, you may be looking for ways to quiet the thoughts and ideas that are racing through your mind.

The Four of Swords refers to the period of silence, stillness and recuperation that is so necessary when chaos and turbulence surround you.

The imagery in this card is so poignant. We see a tree that has almost been broken by the weight of its despair, yes has somehow managed to right itself. The four swords propping it up are all sturdy and unyielding.

The sky in the background may look ominous, and the leaves may have all fallen and died. Yet the tree itself remains strong and secure — there’s no longer any danger of defeat.

This is the essence of the 4 of swords: having come through something so traumatic, you can pause and reflect on all that has transpired before deciding on your next move.

You may have to put some things to rest — such as dreams that have died or relationships that have run their course.

END_OF_DOCUMENT_TOKEN_TO_BE_REPLACED 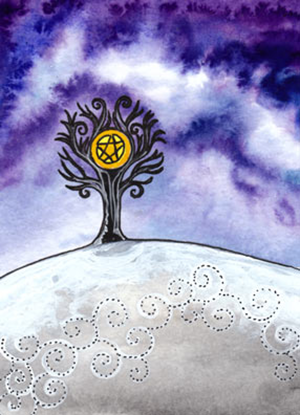 Have you been thinking of different ways to make money or add something to your life without selling out yourself or your enjoyment of life in doing so?

Today you may find yourself thinking about how you can do so and whereas the imagery in this card makes the answer look simple there are a few layers to it that perhaps you need to explore within yourself first before you see your way to clear to making new plans.

Look at the terrain this beautifully depicted tree sits on and the patterned swirls within the landscape.

Meditation may help you come to realise your path and if you can get outside today, into nature and walk under her calming influence the chances are your answers will come to you sooner.

END_OF_DOCUMENT_TOKEN_TO_BE_REPLACED 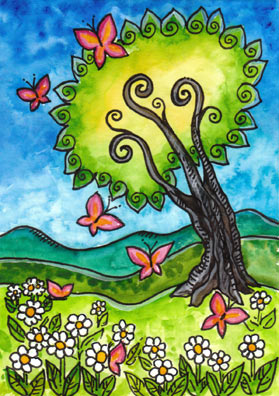 Today you should be feeling a mixture of anticipation, enthusiasm and inspiration as you open your eyes to a brand new perspective and see the world as your playground.

The Page of Wands card denotes a sort of reckless abandon — being open and willing to embrace all that the Universe has to offer, while at the same time not wanting to be tied down.

If you look at the imagery in this card, you see a lush green field filled with wildflowers and butterflies. The butterflies playfully flit from flower to flower, ensuring their propagation.

The tree leans toward the Sun, basking in its glow. Even the mountains in the distance are lush and fertile.

There’s a Joie de vivre aspect to the Page of Wands card. This is a more free-spirited and untethered energy. There’s a sense of being on the verge of something new and exciting — even if you can’t put your finger on exactly what that is.

END_OF_DOCUMENT_TOKEN_TO_BE_REPLACED 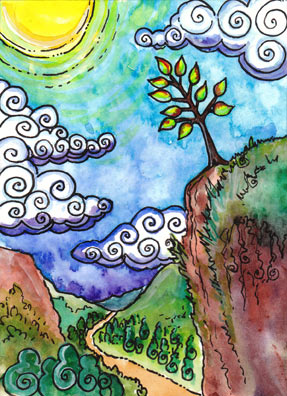 A new day is dawning for you. You’re as ready as you’re ever going to be for a change — especially one that requires you to put the past behind you and prepare for a brand new start.

There are elements of anticipation, inspiration and faith in the Universe with the Fool card. Before he can embark on his journey, he must be willing to throw caution to the wind and let the day take him where it may.

It may not be easy to trust in this process, but the magic that can happen as a result is well worth the effort.

Think about where you may be focusing too much on the destination (outcome) and not enough on the journey.

You’re undergoing a major transition and this card challenges you to be open to the process, unhindered by doubts, fears or misgivings.

END_OF_DOCUMENT_TOKEN_TO_BE_REPLACED 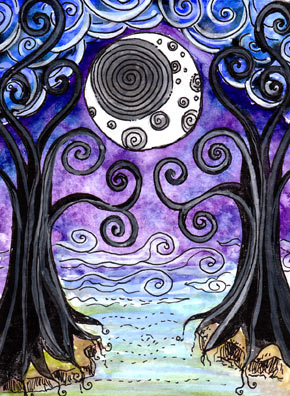 This month you may feel like you’re navigating through murky waters.

The Moon card has a lot to do with that which is hidden, beneath the surface, unconscious or undiscovered.

There is a strong emotional element inherent in this card. And while emotions are not something easily digested by Aries — particularly the “darker” emotions, such as fear, anxiety and insecurity — it’s necessary to explore them if you’re going to resolve the issues that have been hounding you.

But don’t let your imagination run away with you: there’s also some danger of reading too much into things, making mountains out of mole hills or even becoming suspicious or paranoid.

Use this time to get in touch with your emotions and to resolve whatever fears and uncertainties you have that have been holding you back.