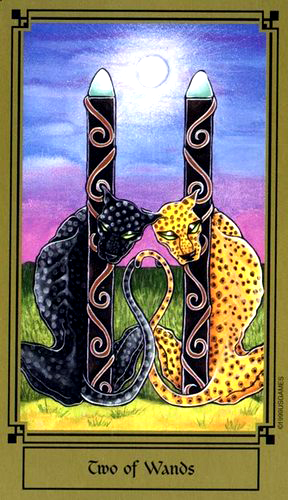 Your card this month is the Two of Wands from the beautiful Fantastical Tarot. The Two of Wands — like all Twos — refers to taking the spark of an idea (seen in the Aces) and forming it into a tangible, working plan.

If you want to make something happen this month, prove it by participating in its development. The outcome you achieve will be directly proportionate to the energy you put into making it manifest.

END_OF_DOCUMENT_TOKEN_TO_BE_REPLACED 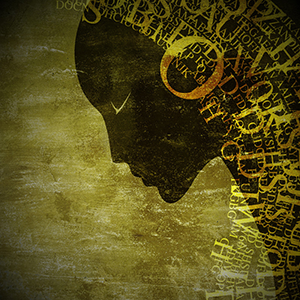 The month begins with 4 planets in Virgo so there’s work to be done, rooms to declutter and file drawers to organize!

Mercury, Mars and the Sun are very close to each other the first 6 days so there may very well be verbal jousting and hair trigger tempers so be careful with your speech as it is possible to inflame any situation with poorly chosen words. Mars will be opposite Neptune and the full Moon on the 13th so I expect some lies or deceptions to be exposed that may be shocking to some.

Things lighten up a bit when both Mercury and Venus go into the sign of Libra on the 15th. Jupiter covers the 15th, 16th, and 17th degrees of Sagittarius. Jupiter transited these same degrees in the middle of January and then again in early July so it’s time to wrap things up around the projects or events going on at that time.

Saturn will station at just under 14 degrees of Capricorn and will go into direct motion on the 18th. Saturn will be traveling with the south node and be quite powerful at this time. Saturn likes to have a solid foundation, follow the rules and there’s no skipping over steps with this taskmaster in a power position. Saturn and the south node will be in an exact conjunction on the 28th that feels kind of karmic. There could be an event that produces a great amount of fear at this time.

Pluto, also in Capricorn at 20 degrees, is stationing there and very powerful the last week of the month. Pluto goes direct on October 2nd. I expect power struggles, protests, fearmongering and government breakdowns to be prevalent at this time. This, too, shall pass.

END_OF_DOCUMENT_TOKEN_TO_BE_REPLACED

We start this week on Monday with Venus trining Uranus with the Moon in Cancer at their midpoint (and sextiling them both). These two planets in harmonious aspect bring an ease of expression and cooperation to the forefront, particularly in social settings. With Venus in Virgo and Uranus in Taurus, the focus is on comfort and consistency. But with a twist: as Uranus likes to shake things up we might be surprised to see these things take on a whole new meaning for us during this time.

Remember that Venus is still conjunct the Sun (and in mutual reception with Mercury) so there’s also a lot of emphasis on originality and individuality. This is a progressive, forward-thinking, trend-setting configuration that encourages creative self-expression. As such, it’s a good time to change things up a bit, especially in how you present yourself to the outer world.

END_OF_DOCUMENT_TOKEN_TO_BE_REPLACED

This week we have three planets and an asteroid (Juno) in Leo all moving into Virgo. Venus and Mars are also still combust, or hidden from view. Mercury is visible, in the early morning skies while Jupiter and Saturn are visible at night. The Moon is still full — in Aries — on Monday, forming a conjunction to Chiron, a semi-sextile to Uranus and a trine to Mercury before the day is through.

These are all relatively benign aspects but because the Moon is in Aries — the sign associated with action, energy, motivation and drive — we may be chomping at the bit to get things moving. The Moon in Aries is lively, free-spirited and adventurous. It’s wide-open to to the world of possibilities, facing whatever comes its way without fear or trepidation.

END_OF_DOCUMENT_TOKEN_TO_BE_REPLACED

This week starts on Monday with Uranus going stationary retrograde, where it will remain for the next five months. As with all retrogrades, the planetary energy is turned inward, making those sudden flashes of Uranian brilliance and insight all the more real.

Uranus is known as the “great awakener” and loves to shake things up — just to make sure we’re paying attention. It’s a naturally rebellious archetype, but the retrograde makes it less about bucking the system and more about challenging our own deeply personal ideals. Uranus will retrograde back to 2º Taurus 39, before it turns direct and starts moving forward again (on January 12, 2020).

END_OF_DOCUMENT_TOKEN_TO_BE_REPLACED

This week we have a planet (Mercury) changing signs, a planet (Jupiter) changing direction and what promises to be a spectacular light show (the Perseid Meteor Showers) by week’s end.

Starting on Monday though, the Moon is still New in Libra, where it is known for fairness, impartiality and objectivity. Those things should come ion hand, since it forms several stressful aspects: including an opposition to Chiron, square to Saturn and inconjunct to Uranus. Fortunately, there’s also a sextile to Jupiter, and a trine to Venus and the Sun before the day is through.