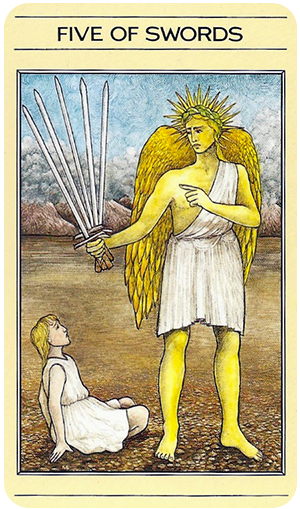 The Sun conjuncts Pluto and squares Uranus today. This is a powerful and intense aspect that can also be incredibly combative.

It can manifest as unpleasant dealings with others — a bully on the job, a loved one who won’t make concessions or admit to being wrong, a “friend” who refuses to take no for an answer, and so on. The possible scenarios are endless but they all have the same theme in common.

Power struggles. A battle of wills. A sense of powerlessness over external (and often oppressive) forces. Being forced to admit defeat.

The Five of Swords — as in this version from the original Mythic Tarot — represents this energy in the story of Orestes and his dealings with the god Apollo as he’s told that he must avenge his father’s death.

He has two choices — to either abide by Apollo’s demands (thus committing matricide and angering the furies) or refuse his obligation and risk Apollo’s wrath. It’s a no win situation, and that’s precisely the predicament to which the Five of Swords refers.

It’s called “Defeat” in some decks, referring to the limitations and obstacles that may seem impossible to overcome.

While you may feel that the odds are stacked against you today, or that everyone  and everything is conspiring against you, you would do well to see the Five of Swords as a test of character. You may not be able to control what happens to you, but how you respond is entirely in your hands.

If you’re forced to accept defeat, you can do so with honor and integrity. As Venus is also entering Aquarius today, the potential for finding a graceful solution to your conflicts is not entirely out of reach.

A newer version — the New Mythic Tarot is still in print.