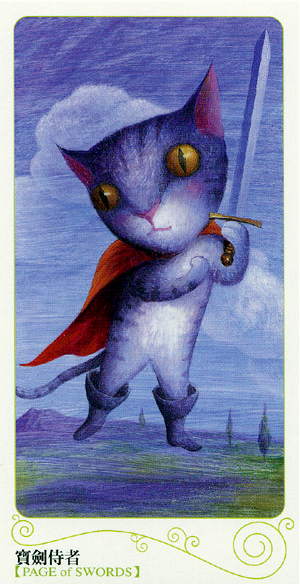 As Mercury enters Gemini today you may wake up with a spring in your step, ready to tackle whatever misadventures come your way.

The Page of Swords — this version from the Tarot of the Magical Forest — is known for having places to go and people to see. He’s restless, distractible and easily bored, so if this is someone in your life make sure you’ve got ways to keep him entertained.

There’s a sort of effortless buoyancy seen in this version of the card, with the Page of Swords playing dressup in his red cape and superhero boots. He wields a sword in one hand and pounds his chest with the other.

He may try to look tough but he’s no more menacing than the pussy cat he is underneath all that posturing and bravado. Although he is known to use his sharp tongue as a weapon, in the end he’s really harmless.

The Page of Swords may have his head in the clouds but that doesn’t mean it’s not full of ideas. He’s thinking and planning and strategizing at any given moment. He may have BIG ideas — bigger than he’s prepared to handle, much like that giant sword in his hands. But it’s those ideas that propel him forward, toward ultimately accomplishing his goals.

The Page of Swords is often charming and clever. He (or she) is also somewhat immature, temperamental and emotionally unsophisticated. You may grow tired of his antics if this is someone in your life, and you may have to resist the urge to yank him by the ear and send him to his room.

But there are positive attributes associated with this card as well. There’s curiosity, innovation and idealism that’s hard to find anywhere else. These are the gifts that come with the Page of Swords — which can inspire you to reach for the stars as well.